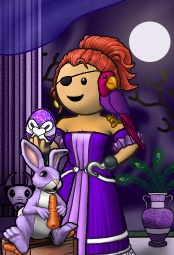 Adrielle is a pirate on the Obsidian and Meridian Oceans, and a retired pirate on the Cerulean, Emerald, Ice, Jade and Opal Oceans. Adrielle is also a player-artist, and a member of the island design team. In the past, she has enjoyed participating in and running events on the Yohoho! Puzzle Pirates Forums, and is a player-administrator of Yppedia (as Addyrielle).

Adrielle's achievements on other oceans can be viewed here.

Adrielle has been playing Puzzle Pirates since February 12, 2006. After becoming addicted the game after a few days of playing, Adrielle soon convinced three members of her real-life family (Kecapmanis, Ellenya and Jollyrob) to join the game, as well. Adrielle was originally from the Viridian Ocean, but soon began to travel to other oceans in the Puzzle Pirates world. At one time, she played everywhere, but these days Adrielle can mostly be found on the Obsidian and Meridian Oceans (the latter being where most of her items reside).

Adrielle started on the Viridian Ocean in February 2006, where she joined the crew Hell Avengers on her second night of playing the game. She was recruited for this crew from the Sakejima Island dock. During her first few months of playing, Adrielle quickly worked her way up through the ranks of the Hell Avengers crew. She was appointed as the crew's captain when the previous captain, Lenna, left the game in September, 2006. Adrielle was also made queen of the flag, Jewelled Seas, at this time.

During the first few years of Adrielle's captaincy, the Hell Avengers crew was strong, and its members were all good friends who enjoyed pillaging together. Adrielle's favorite quotes included the Hell Avengers battle cries of "mash much rich ships", and "team and mash". She could usually be found pillaging the seas of Viridian Ocean with her crew, proudly shouting these phrases before each melee. During these early years of her pirate career, if Adrielle was not pillaging, she was usually in Atlantis, at the Cursed Isles, or stalking the job offers on the notice board - eagerly watching for Atlantis and Cursed Isles trips to appear.

As queen of the flag Jewelled Seas, Adrielle expanded the number of royals and titled members, believing that the extra hard work of some members needed to be rewarded. Jewelled Seas went on to be successful in several event blockades, claiming a victory on (Adrielle's birthday) November 8, 2006. However, gradually, real-life commitments forced many of the old members of the crew and flag away from the game, and the number of members slowly dwindled. This newfound lack of crew-mates led Adrielle to finally leave the crew that she had been in for more than four years, and to go in search of greener pastures. In late 2011, Adrielle handed the captaincy of Hell Avengers, and the rule of Jewelled Seas, over to her long-time senior officer and first mate, Ellenya.

Adrielle then joined the crew Eye of Harmony as a senior officer. However, she soon became extremely unhappy with her new crew and flag, and left to create a new crew with her friend from the Malachite Ocean, Snowimp. This crew is called Hug the Hippy, and was named for Nemesis (who believes that people who hug are hippies) and Apollo (who loves to hug). Following the ocean merge in early 2012, Adrielle was moved to the newly-formed Meridian Ocean. There, she sailed with the Hippy Huggers, and discovered a new obsession with shoppe labor puzzles.

During May 2012, Adrielle decided that it was time to hang up her pirate hat and leave the oceans. However, she later returned to the game in mid-2016, discovering that she loved Kraken Hunting. In July 2017, Adrielle began exploring the Obsidian Ocean, and it has already become her second home.

Adrielle has also been a volunteer judge for events including:

Aside from puzzling, one of Adrielle's favorite pastimes is creating art. During her early pirate career, she frequently entered art and creative writing contests on the Yohoho! Puzzle Pirates Forums. She sometimes won, and always had fun trying to create the best entry that she could. Adrielle's unique art style, bright colors, and cute animations were popular among players on the forums, where she often created avatars for other forum users (her most recent free avatar thread can be found here). Some examples of Adrielle's avatars and art are shown here, and some of her creative writing can be read here and here.

Adrielle was eggstatic to have two of her egg designs featured in-game in 2010 and 2012.

Adrielle designed five seasonal trinkets for the game during 2011 and 2012.

Adrielle was part of the design team responsible for creating the islands on the Obsidian Ocean, which is currently in beta testing. She worked on Bogong Island (which she named after Mount Bogong in Victoria, Australia) with Kingofcards. The island is snowy - but not too frozen for trees and flowers to grow.

Kingfisher Island was named for the colorful birds of the same name, and features a gardener's corner. Point Petrify contains a coffin-maker's workshop, a lookout for spotting potential enemies (with a bell to ring if those on watch duty need to raise the alarm) and a graveyard. It also features a camp on the southeastern arm of the island - where interesting items tend to wash up on the islands' shore.

Loggerhead Island was a revamp of Alpha Island on the Midnight Ocean (which was originally created by the Puzzle Pirates Gods). Adrielle revamped the original island's design to make it fit the theme of Obsidian Ocean's contested archipelago. It now features a garden, and thematic fortifications. Three flamingos also currently call the island home.

Adrielle's Cursed Isles scenes were implemented in March, 2010. These scenes were later tweaked by the arrtists in June 2011 for release 2011-06-28.

Adrielle likes to collect things, including:

As well as creating art for others, Adrielle also liked both creating avatars for herself, and being the subject of other artists' work. Adrielle accumulated so many lovely avatars that she decided to rotate them, showcasing a different avatar each week. Some of the most recent avatars used by Adrielle on the forums can be viewed below, while a more extensive collection can be viewed here.