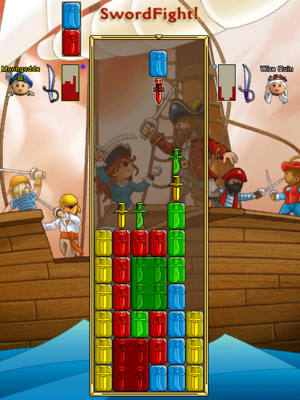 Swordfighting (often abbreviated as SF or sf) is a multi-player parlor game. It is sometimes referred to as a brawl when it is played with more than two people, or a fray when played against NPP monsters.

Swordfighting is free to play three days a week. Swordfighting at sea, challenges, and monster frays are always free.

Swordfighting is a commonly encountered activity in the pirate world, and can be played in many different settings:

Swordfighting is about clearing pieces from the board in order to fill up the opponent's board. As the fight progresses, boards become more difficult to keep clear as there are more pieces in play and incoming attacks get larger.

The swordfighting board is 6 tiles wide by 13 high, giving a total of 78 spaces.

There are two sets of pieces that enter the swordfighter's board. One is a series of random pieces which the swordfighter can move and place where he or she wants to; these fall from the top of the fourth column in pairs at a steady pace. The other contains the opponent's attacks; these attacks enter the board independently of the player. Most of the opponent's attacks will fall from the top, but some (horizontal strikes) may enter the board from the side.

On each side of the board, the teams are visible together with their swords. The opponent is always shown on the right. A miniture rectangle beside each opponent's name gives a rough indication of how blocks are distributed on the opponent's screen. This preview updates every few seconds. Teaming configurations are shown as dots beside each pirate's preview; these configurations are updated in real-time.

The purple blocks with markings.

There are two different classes of pieces in swordfighting: solid blocks and cutout blocks ("breakers"). Solid blocks will land and remain on the board, whereas breakers will shatter all connected pieces of the same color and send an attack proportional to the size of the shatter to the opponent. These attacks are described in detail in the Creating attacks section. Note that two blocks are considered adjacent if they are side-by-side or one is above the other (diagonal adjacency does not count), and two blocks are connected if a path of adjacent blocks exists between them.

Blocks and breakers come in one of four standard colors: red, yellow, green, and blue. Each color piece depicts a different sword; for instance the red block and breaker always has the appearance of a skull dagger. In some other settings additional pieces are introduced: 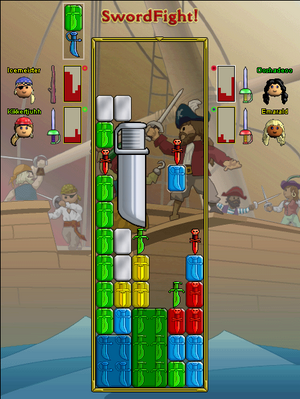 This player has received a sword strike and several sprinkles.

Swordfighting clears, also known as "attacks", come in two flavors depending on how the blocks were arranged before they were shattered. These types are minor breaks ("sprinkles"), which enter the board as individual opaque gray blocks, and major breaks ("strikes"), which enter the board as sword images. It is possible to send multiple attacks of either type at the same time, known as a combo. Note that when attacks are received, they only include blocks, never breakers.

The piece that each opaque block finally turns into is determined by the drop pattern of the opponent's sword. Some swords produce drop patterns that are harder to clear than others, thus making the choice of sword an important one. The sword's drop pattern is the only effect a sword has on the puzzle.

The complete swordfighting mechanics behind the placing of attacks on an opponent's board are extensive and complicated. Suggestions for further reading can be found in the External/other links section below.

Note that NPPs do not receive attacks in the same way that a player would. Attacks sent to them will not necessarily have the same effect as they would versus players, although proportionally more damage is still dealt by larger attacks.

Like-colored blocks solidify into a large block of the same color if they are arranged in a 2 x 2 or greater rectangular formation. When this fused block shatters, it sends a sword "strike" to the opponent. A strike lands on the opponent's board as an immovable image of a sword for one turn, and then becomes an opaque gray block. These gray blocks only remain on the board temporarily, as they decay to translucent blocks the following turn, and become standard blocks after that.

All unfused blocks are sent as "sprinkles", or individual opaque gray blocks. As with strikes, these gray blocks gradually decay into standard blocks.

One sprinkle block is sent to the opponent for every two loose blocks (including breakers) that are shattered. If an uneven number are broken, the value is rounded down. If multiple sets of blocks are broken at once (e.g. a group of 5 pieces, and another group of 4 pieces) then each attack is calculated separately, and the resultant attacks are added up. In the example, the final number of sprinkles would be 2 + 2 = 4. 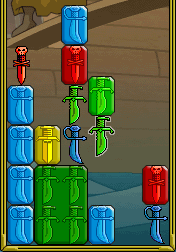 When the green block pair lands, it will shatter the large green fused block. This will cause the blue breaker and block to become adjacent, which will then shatter with a "double" chain multiplier. In total, 3 sprinkles and one 1x4 sword are fired at the opponent.

Attacks can be greatly magnified by including them in part of a chain. When a block is broken, the pieces above it fall onto the pieces below. If, after the pieces have fallen, a breaker becomes adjacent to a series of blocks, then those blocks are also broken. The "chain" continues until no more blocks can be shattered in this way. Being able to make double, triple, bingo, donkey, vegas, or greater chains, will multiply the attacks sent. The nth link in the chain acts as an n-times multiplier. For example, attacks sent during a double are magnified by 2. Similarly, attacks sent during a donkey are magnified by 5.

Chains are applied to strikes and sprinkles as follows:

A player loses when their fourth column becomes completely full (meaning no more pieces can enter the board). In a two-player swordfight, the opponent wins when this happens. In a team swordfight, the team wins once all opponents have been eliminated in this way.

As with most multiplayer puzzles, it is possible for a player (or team) to win the game due to the opponent (or team) forfeiting or disconnecting.

An instakill, or insta, happens when a sword lands in the board's fourth column, eliminating that player instantly. It is not possible to instakill a player with sprinkles, as sprinkles refuse to land in the top of the fourth column. These types of attacks are often employed in multiplayer swordfights, where due to teaming conventions it is likely that some players will be able to design their chains unhindered by incoming attacks.