Instakill (derived from "instantaneous kill"), more commonly known simply as insta, is a term used in swordfighting to describe a sword falling into the top block of the board's fourth column from the left, filling it completely. Since all pieces drop from the top of the fourth column (indicated with a small arrow), the player is eliminated immediately, without any chance of breaking the attack.

An attack containing just sprinkles cannot instakill. They will always leave three blocks of space in column four - room for two more pieces. Although unlikely, it is possible to break out from an all-sprinkle flood.

NPPs can be instakilled, but not in the same way as players. Bots are not affected by the number or sequence of strikes sent, but by the total number of blocks. As the number of blocks sent in an attack approaches the number of spaces on the bot's screen, the chances of instakilling the bot increase. Sending 78 blocks or more in one attack is a virtually-guaranteed bot instakill. 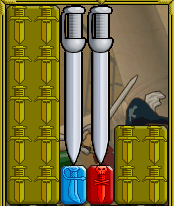 Having a fused block at the very top of the first and second columns can cause an easy instakill.

An instakill can happen only with strikes, and only when more than one strike is released simultaneously. There are a number of combinations that can generate instakills with varying likelihood. The following techniques are written based on the How drops work article.

(3xN)+(3xN) strike is the only technique that is guaranteed to generate a strike in column four. It requires that two fused blocks of width three be broken (if they are 3x3 this must be in a chain, and not as the first step), with no other fused blocks before them. This causes the first block broken to make a sword in 1-3, and the second to make a sword in 4-6. The difficulty in this lies in actually building the blocks, which is not an easy task—getting one 3xN block alone is often a tenuous task. The second 3-width sword must also be long enough to reach the top of the screen in order to instakill.

In sea battle, if the opposing crew is in rum sickness, 2-2 will also work.

This technique was primarily pioneered by Eyes and Maxdemian, and has really caught on for brawling competitions, where an untargetted swordfighter can build a fatal stroke without interruption.