The rapier is one of the seventeen sword types available to players in the game. It is produced at iron mongers. On subscription oceans, the rapier may be used by non-subscribers.

Since the rapier has a nearly even distribution of all four colors in its drop pattern, some consider this to be the best sword in the game for defeating NPPs. While it is clear that NPPs do not play the swordfighting puzzle, it is unclear to what extent the drop pattern is a factor when facing NPPs. Any conclusions drawn by players are pure speculation, as no player knows exactly how drop patterns work against NPPs.

What is known is that anyone hoping that the rapier will instantly turn them into a super-powerful NPP slayer will be completely disappointed. No sword can increase the size of one's attacks - a player who cannot create effective chain attacks will always have problems versus NPPs, no matter which sword they use. One should also keep in mind that player ships also prowl the oceans and that there may be better swords to use when caught in a unprovoked PvP fight.

The rapier is available to purchase in the following color combinations. 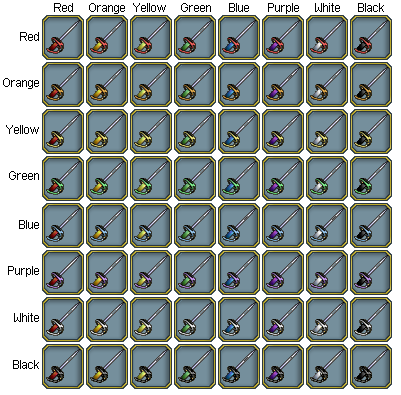