The foil is one of the seventeen sword types available to players in the game. All new pirates start with a foil in their booty panel. It is produced at iron mongers.

It is the only weapon that can be purchased from an iron monger without paying a delivery fee of doubloons on the doubloon oceans. As it is such a cheap sword, given as starting equipment, it also has one of the worst drop patterns, especially when making sprinkle attacks. It however, has a better drop pattern than the dirk.

Given that the pattern only sends blocks to the opponent, a lot of its attacks will be sent back repeatedly as strikes and rarely contain any sprinkles.

Due to its glaring weaknesses as a starter sword it should never be purchased or used.

The foil used to be called the Fencing Sword.[1]

The foil is available to purchase in the following color combinations. 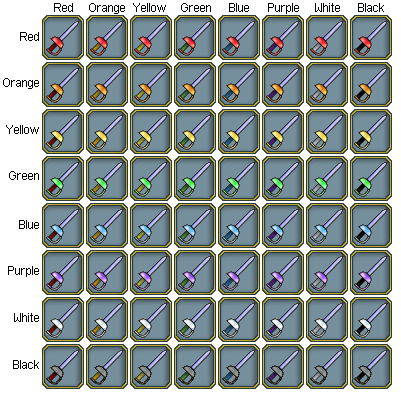