The drop pattern of a red/red enameled falchion.

Each sword has a particular drop pattern, which indicates the color and arrangement of attacks that are sent to an opponent during a swordfight. This pattern is determined by the type of sword and the sword colors, and cannot be changed after the sword has come into existence. The drop pattern is the only property of a sword to have a direct effect on the swordfighting puzzle. All patterns are exactly 6 columns wide, but the number of rows in each pattern varies between 3 and 6 (inclusive).

Each of the different drop patterns confers both strategic advantages and disadvantages to the pirate who uses a sword with that pattern. Some patterns, for example, may produce attacks that are difficult to remove from the screen (clear) if they are sent using strikes. However, those same attacks may be easier to clear if they are sent using sprinkles. A great deal of swordfighting strategy revolves around playing to the strengths of a particular sword and exploiting the weaknesses of the opponent's sword.

The sword owner can view the drop pattern by hovering the mouse over the sword when it is in the booty panel, or in a sword rack. Additionally, the owner can view his or her pattern during a swordfight. Iron monger shoppes and stalls also display sword drop pattern previews.

When incoming attacks from an opponent are received, they take one of two forms. Sprinkles, which are individual gray blocks, and strikes, which are sword-shaped silver blocks which enter the board horizontally or vertically - and which become gray blocks on the following turn. Refer to the links below for information on how sprinkles and strikes are generated from player attacks. Note that if a player receives attacks from multiple opponents, each attack will match the drop pattern of the respective attacker. Once attacks have entered the board and have settled, the opponent's drop pattern is mapped onto them as follows:

Strikes may be either vertical or horizontal, and both make use of the whole drop pattern - unlike sprinkles, which are restricted to rows 1 and 2. 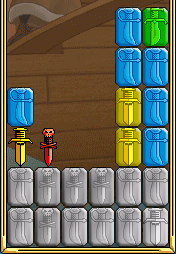 The following images illustrate how drop patterns are applied to blocks in the swordfighting puzzle:

All purchasable swords can have two enamel colors - the first for the guard, and the second for the hilt (or handle). These sword colors influence the arrangement of colors in the drop pattern, and in some cases (see pattern reversal below) they can also affect the pattern itself.

Note that the first and second colors do not map directly onto the pattern - for instance, a first color of red does not mean that certain blocks in the pattern will always be red. An example of this is the black/green falchion and the black/purple falchion, which both share the same pattern, but instead of half of the colors being in the same place all 16 colors are in different places. It is thought instead that the first and second colors act as indices to a table of block colors, which in turn places colors on the pattern. Nickbush's drop pattern generator[1] works on this basis.

All sword patterns will be reversed - mirrored along an imaginary line mid-way between columns 3 and 4 - if the first color of the sword is blue, green or purple. Reversal will not have a noticeable effect on some swords, such as the rapier or the long sword, because the patterns are already symmetrical. Other swords such as the falchion and the saber have asymmetrical patterns, and the reversal is noticeable. Below is an example of a normal and a reversed saber pattern:

It is easy to see that the above pattern has been mirrored. Whether or not a reversed sword lends an advantage to a player is a frequent topic of discussion among swordfighters. One argument supporting reversed swords is that reversed sword drop patterns are less commonly known than their ordinary equivalents, thus giving that player the 'surprise factor' over another player. Some reversed swords may inject an additional color into strategic columns or rows,but other reversed swords may do the opposite.

Below is a table of all known sword drop patterns. Reversed versions of swords are not shown.

Don't let appearances fool you; just because a drop pattern looks mixed doesn't necessarily mean it's as deadly as it looks, nor is a seemingly monochromatic pattern horrible. However, as a swordfighter, your style of play will invariably favor one broad type of sword or another, so here's a brief guide to picking the best one for you.

If your top priority is just keeping a clear well and breaking everything as soon as the option presents itself, you want a sword with a fairly mixed bottom two rows—since you'll be sending mostly single-row sprinkles to your opponent—like the stiletto, poniard, or skull dagger. While these swords do not have especially strong middle rows, their bottom two are the ones that get sent across the most, and they're the ones that are most devastating.

If you're a more advanced swordfighter who likes to build up big blocks and send strikes instead of sprinkles, you'll be needing a sword with strong columns, and not necessarily a strong bottom row. For this purpose, you'll be looking at the rapier, the long sword, the falchion, and the cleaver. Note that the rapier requires big strikes in order to be effective, because the effectively monochromatic lower rows won't do you much good.

The other swords are either notably weak (In particular the cutlass and dirk are notable for weakness despite price), or are specialized and not broadly used for that reason (The backsword, for example, is only available to box edition buyers, and is similar to the poniard in style and pattern.)