The dirk is one of the seventeen sword types available to players in the game. It is produced at iron mongers. On subscription oceans, the dirk may only be used by subscribers.

While the dirk is an inexpensive sword, it does have the second weakest obtainable drop pattern in the game - with only the stick being worse. The sprinkles are monochrome misery, the smaller strikes are equally as horrendous and massive strikes are accompanied by massive blocks for the opponent. The bigger you hit, the more you hurt yourself.

Getting even outclassed by the Foil, this sword should never be used other than for entertainment purposes.

According to Wikipedia, the dirk is a short dagger used by pirates. But also a:

The dirk is available to purchase in the following color combinations. 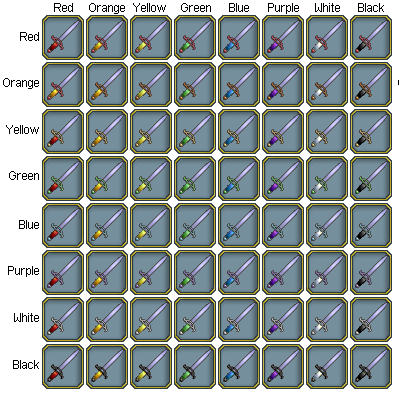