The scimitar is one of the seventeen sword types available to players in the game. It is produced at iron mongers. On subscription oceans, the scimitar may only be used by subscribers.

The scimitar is widely considered to be a defensive sword.

Its vertically monochrome pattern in the center forces the opponent to mainly sprinkle straight columns of pieces which act as good ammunition for counterstrikes. The corner hits of a scimitar are comparable in strength with the Falchion - however - they share same color, which makes them relatively easy to connect and clear at the same time. This sword is best against swords that have very weak sprinkles, such as the Katana, but loses hard to small striking sprinkle swords such as the Skull dagger or the non reversed Saber.

Ultimately the lack of both offensive power, easy clearability and the reliance on poor sprinkling from the opponent prevent this sword from being top-tier.

The current drop pattern of the scimitar used to belong to the skull dagger, and vice versa. The drop pattern swap happened in release 2005-02-11. 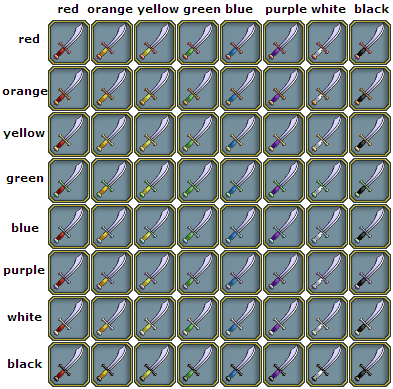