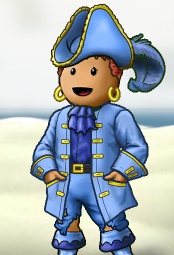 Dragneel, usually called Drag, is a fleet officer of Exotic Vanquishers. He started his pirate career in late 2010, more precisely on the December 6, 2010, at 10:47:40 PM PST. He was active until 2014, then took a long pause from piracy. Dragneel came back on September 7, 2018, nearly 4 years later. He is currently homed on Admiral Island in the King Kottage. Prior to his comeback, he was a fleet officer and the strategist of Da Kine.

His favorite activities are Brigand King hunting and Haunted Seas.

He is also part of the AEAS, CIAAS, HuBS, MPAS, SASH, ZEST and UPAS.

Dragneel started his pirate career on December 7, 2010. His home was found on Bowditch Island but he preferred to stay on Admiral Island due to the lack of activity in the Stork Archipelago. On his first pirate day, he even started a small elite sloop pillage for his old friend, Pacifit from Poseidon's Tricorne and got a booty of approximately 20,000 PoE.

After building his stats on the same day, he decided to try getting a job on a sea monster hunt as he knew it was the only way to make quick money. He applied for a Cursed Isles voyage on the notice board and got jobbed into Da Kine. He was surprised as he didn't noticed he jobbed for Da Kine, a former crew, whose captain Luckysox was a good friend. He then decided to permanently join the crew after the adventure.

On the second day, he was already quite known for his Gunnery skill and acquired a fleet officer position from his captain for his trust, good stats from previous pirate and for running pillages often.

On the third day, while playing poker in the inn, there was someone selling a sloop for 35,000 PoE but Dragneel did not have enough money and thus asked for money from his captain. Unluckily, someone else bought the sloop before him. The captain then decided to offer Dragneel the sloop on which he was doing pillages as an early Christmas gift which pleased the latter very much.

The day after, Dragneel was the master at arms of Ibringdoom and for Eaglesfan in Atlantis the next day. Some days later, Eaglesfan even let Dragneel battle navigate his war brig in Atlantis and ported with a booty of 75,000 PoEs after 2 successful entries. On the second day Eaglesfan let Dragneel battle navigate his war brig, the latter sunk after sinking 20 triketos due to a lag Dragneel had which prevented him to shoot and sink a gorgonyx in the turn he lagged causing the gorgonyx to damage the war brig further.

On the second week, there was a lot of blockades on the Sage Ocean and Viridian Ocean with the latter paying more. This helped Dragneel to earn more money faster than Sea Monster Hunts. One day someone was selling a Midas-classed sloop for 100,000 PoEs but as Dragneel refused, the seller asked Dragneel to offer and the latter offered only 75,000 PoEs but the seller still accepted.

Dragneel bought a cottage on Admiral on December 20, 2010, as his shack was already completely full of furniture. This house is going to be the one where Dragneel will stay till he has enough money to buy his own villa.

Drag ran his first own Cursed Isles trip on December 30, 2010, but unfortunately sank just before entering the isle due to a sloop spawn in front of him.

In April 2011, Drag temporarily left Puzzle Pirates for a month. He got back into the game on July 10. During his absence, several changes were made; new ships, expeditions and colors. The most striking change was the inactivity of his crewmates. He thereafter left on July 15, for Hardcore Explorers as fleet officer, where new adventures are awaiting him. After being rejected by so many sea monster hunts due to his low stats and playing poker, he succeeded into gathering enough money to do his own Atlantis run with his war brig within 2 weeks. He set his ship to sail on July 27 towards Distant Fort. After 3 not-so successful attempts, he managed to bring his war brig back to port, with 30,000 PoEs booty and obtained a karkinos from owner's chest, which compensated the bad trip.

Weeks later, Dragneel temporarily left the game for two months due to real life commitments. He later came back on Friday November 11, 2011. That day he set a goal to get his ultimate gun, to make the 11-11-11 day one to be remembered. He succeeded to achieve his goal, earning him the Ultimate Gunner and the Golden Cannon shortly after. In the early December, he won lots of money in poker and could afford his war frigate to do his first Haunted Seas. On December 6 he got his first swamp colored gator on Disable's hunt which he didn't notice until the next day. On that day, December 7, he decided to attempt his first Cursed Isles run. He did two entries on which both had leavers and jobbers who did not produce enough tokens. Despite this, he succeeded to port with him winning a serpent from vessel owner's chests.

After 4 years of inactivity, Dragneel came back on September 7, 2018, only to find a dormant crew. One day later, after a blockade, he joined Exotic Vanquishers from the flag Pull Out, defender of Admiral Island. During this same blockade, he earned his second familiar, a navy krakling named Drip. In only 2 days, Drag succeeded in earning more than 250,000 PoE. On the 30th of September, Dragneel acquired two new sloops in his fleet.