If you're looking for the Scrapper trophy, go to trophy. 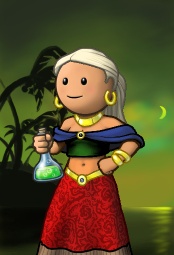 Scrapper (or scrappy, as called by friends) lives on Napi Peak on the Cerulean Ocean and on Port Venture on the Obsidian Ocean. With the merger of the Cobalt and Midnight oceans, Scrapper became Scrapper-West.

On the Cerulean ocean she is a cabin person of the Sweet Longings Crew and she is a commander in the Napi Peak Navy. Her name comes from the hobby of the woman behind Scrapper.

On the Obsidian ocean she once again claimed the name Scrapper. There she was an officer in the Sea Sick crew and a lieutenant commander in the Port Venture Navy in the Greywaters Archipelago. After joining the Nyte Krollers crew, she received the rank of fleet officer. On August 12, 2018 she became a senior officer in charge of the officer training in the crew.

On July 30, 2018, Scrapper washed ashore on the island Port Venture on the Obsidian Ocean. She spent her first days familiarizing herself again with the different crafting puzzles as well as the ship puzzles and after a mere two days, Scrapper was welcomed in the Sea Sick crew by Fappinerday.

On August 11, 2018, she was welcomed in the crew Nyte Krollers by her hearty Cyko. On August 12, 2018 she became princess of the flag Stranger Tides. In the Nyte Krollers crew she is in charge of the officer training.

She is looking forward to going back to Atlantis and to hunt some kraken lairs of which she was a huge fan in the past. She likes patching, gunning, distilling and alchemistry.

Like on the Cobalt Ocean, Scrapper has a few dreams, like all pirates. She dreams of having several ships of her own, running great pillages and having a nice house with a garden.

On September 15, she saw one of her dreams fulfilled. She now has a steam class sloop.

What she couldn't do on Cerulean and Cobalt, she now hopes to have, one day, an estate full with all kind of pets in all colors. Her favorite pets to have are:

Scrapper hopes to have a large fleet of ships with the names Angelfish, Sunfish, Silverside, Adventurous, Chocolate, Sailfish, Blowfish, Creative and something fruity. Ideally she'd like to have these limited edition ships:

And additionally, if these ever come to Obsidian:

And last but not least, Scrapper hopes to win a familiar or two someday. Familiars she'd really like to have are:

Remarkable trophies and other achievements

These are all the trinkets Scrapper has won or been gifted on the Obsidian ocean.

Click [show] to expand to see all the Atlantis trinkets

Click [show] to expand to see all the Beachcomber trinkets

Click [show] to expand to see all the Brigand King trinkets

Click [show] to expand to see all the Cursed Isles trinkets

Click [show] to expand to see all the Greedy trinkets

Click [show] to expand to see all the Haunted Seas trinkets

Click [show] to expand to see all the Kraken trinkets

Click [show] to expand to see all the Viking trinkets

Click [show] to expand to see all the miscellaneous trinkets

A tidbit: Scrapper is planning a zoo in an estate.

Scrapper washed ashore on the island Napi Peak on July 23, 2007 on the Cobalt Ocean. Before starting on the Cobalt Ocean, she had been playing other pirate games, but the fact that you can play with many people together and let everything evolve, in essence a social puzzle, is what attracted Scrapper to participate here.

She began by trying out several store puzzles and doing some pillages and had a lot of fun with all of that. After just two days she was invited by Toothfaerie to join the Full Moon Rising crew as a pirate. While she slowly but steadily got her piracy skills up, she was dreaming of a great career as a pirate. After several weeks she was promoted to officer of the crew. A lot more puzzling and a few weeks later, she was promoted to fleet officer. At Sunday, September 23rd, 2007 she became a senior officer in the crew. She could be regularly be found in one of the Full Moon Rising stalls, in Atlantis or on a pillage.

Due to a long absence, she became a cabin person in the crew on the Cobalt Ocean.

After this long absence, Scrapper has returned and can now be found on the Cerulean Ocean as Scrapper-West. Her name got a suffix because of the existence of a pirate with the same name on the Midnight Ocean.

Scrapper has a few dreams, like all pirates. She dreams of having several ships of her own, running great pillages and having a nice house with a garden.

Scrapper hopes to have a large fleet of ships with the names Silverside, Wrasse and Classy. As of 2007, she has three ships with Silverside in the name.

Scrapper is having the most fun while Sailing, Bilging, performing Shipwrightery and pillaging. Although she's also having fun with Carpentry, it's not her most favorite puzzle. She still has to learn Navigation and Battle Navigation. Chatting with friends and Learning about shoppe management are things you'll find her doing very often too. And last but not least, Scrapper is a huge fan of Atlantis.

In the past Scrapper owned or managed various stalls and shops. Due to inactivity her ownership/management ended.

Remarkable trophies and other achievements

* Indicates more then one of exactly the same Trinket.

All the pets and their locations

A tidbit: Scrapper is planning a zoo in an estate.