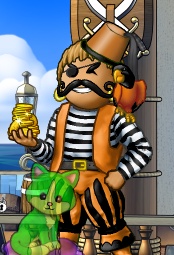 Gunnerfreak is captain of the Cerulean Ocean crew Blood in the Water, lord of the flag The Phoenix Rises.

He is also the captain of the Obsidian Ocean crew Blood in the Water, lord of the flag Lion's Bane.

He started his life of piracy sometime before the 25th of July, in 2010, on the retired Midnight Ocean. Initially, he started playing under the name of Hungryhans (Once purged, but was first Pirate name before screwing up on Facebook login.) Then, he underwent a reincarnation, going by the name of Zombiehunt. He then regenerated [1] into Skellyzhunt, then after some time regenerated into Carperfreak. Carperfreak regenerated one last time, emerging as the well-known Gunnerfreak.

His favourite puzzles are Carpentry, Gunnery, Navigation, Patching, Rumble, and Weaving. Other puzzles he is good include those of Alchemistry, Bilging, Foraging, Sailing, Shipwrightery, and Hauling.

This pirate is a stattart.

From December 17-ish, 2017, the player went on hiatus until the 21st of November, 2021 and currently sails his home seas of Cerulean Ocean.

Positions held (past and present)

On 13/5/17, he assisted Midnight Yacht Club defending Nu Island in a blockade against Admiral Finius & sank at least 7 ships.

This pirate usually wears the following outfit in the colour scheme of orange/black to honour his old high school colours.

Gunnerfreak started collecting limited edition ships on a regular basis when the Alice class sloop was out in shoppes, back in July/August 2013.