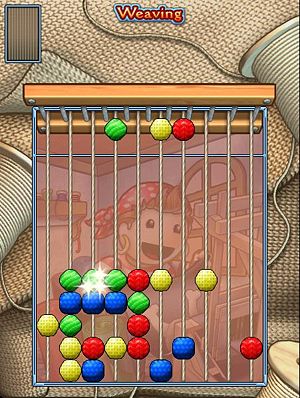 Weaving is a crafting puzzle. It is played in weaveries. On January 23, 2008[1] design Haddock of the Grand Crafting Puzzle Project had been selected for development into Weaving. It was released to the Ice Ocean in the release on February 25, 2010 and to production oceans on March 9th, 2010. Its free play day is Monday.

The objective of weaving is to clear groups of four or more identically coloured pieces. You have a set of two to four threads at the top of the board. Use the arrow buttons to move the threads left or right, then hit the space bar to batten it down, pushing the threads onto the board. The comb will then push the threads as far as it can. As you clear groups, the indicator at the top left, a bolt of cloth, will fill up. Once completed, the puzzle session is completed. If you try to push threads onto a column that's already filled to the top with other threads, the game just won't place the threads there. If it's impossible for you to place anymore threads on the board, you get a message saying that you booched it and the session ends.

The game starts with two colours, then three, then finally four at the highest level.

Clearing bigger and multiple groups in a single move scores much greater than just clearing one group of four at a time. The best way to get points appears to be chaining clears (i.e. Double, Triple, Bingo, etc.) by having the comb push threads to create a clear, which causes another clear, and so on. Pieces that sparkle are worth bonus points, but they last only four moves before the bonus expires. The number of sparkles on the piece indicates the number of moves you have remaining to be able to get bonus points. It is currently unknown if more sparkles means more bonus points or if the bonus is identical regardless of the number of sparkles.

There are also several bonus messages. If you clear a large enough group (9 or more) of a certain colour, you get the message "Looming Large!" There is also an "Unbeweavable" message, believed to be achieved by getting at least one group of each colour cleared in a single step. Getting an Unbeweavable is believed to give you a very large bonus.

Once you push down the fourth thread, then the game is rated.

There are several difficulty levels in weaving.

The following trophies are related to weaving: