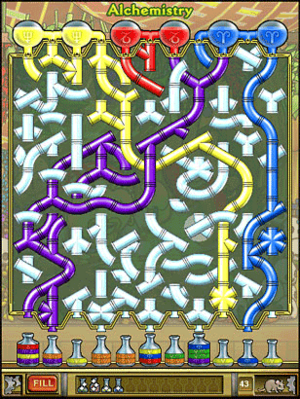 Alchemistry is a crafting puzzle played at an apothecary. Completing a round of alchemistry finishes two hours of labor on a product currently in the apothecary queue. Alchemistry appears to loosely borrow its mechanics from Popcap's Rocket Mania.

Alchemistry is free to play one day a week.

The objective of alchemistry is to connect the colors in the bulbs at the top of the screen to the matching-colored bottles at the bottom of the screen.

Alchemistry can be played with the mouse or arrow keys; the individual controls can be modified using the options screen. Use the mouse (or arrow keys) to select the piece you wish to rotate; a left mouse click (or S key) rotates the piece counterclockwise, while a right mouse click (or D key) rotates the piece clockwise. You can also use a mouse wheel if equipped to rotate either way. Hitting the "FILL" button (or the spacebar) causes all the paths you have connected to be filled. This option does not appear until at least one path goes to a bottle. A game is finished when all the bottle slots at the bottom of the screen (between "FILL" and the rat image) have been filled.

Routing a color to a wrong bottle breaks the bottle, as shown in the right side of the above image. Broken bottles do not move from the conveyor belt, thus clogging a spot for the remainder of the game.

If you find a bottle with more than one color, the bottom-most color is always filled first. After a particularly good fill, you might notice bottles gleaming (you can check by clicking on any of the bottles on the conveyor belt). The more gleams, the more valuable the bottle will be when it is filled completely. Once filled, the bottles will move to a slot on the bottom of the screen, where they will show zero, one, two, or three stars. The most valuable bottles have three stars.

Three special pieces will occasionally pop up on your board. They are more likely to appear after a high-scoring fill.

The gold coin or "bonus piece" gives a slight scoring bonus when a color is routed through it.

The arrow icon, called the "multifill piece", is rare, but if routed through it fills all consecutive instances of a color in a bottle—as long as it is the bottom color. In the example at the top of the page, the two orange bottles could be multi-filled but the green on the right and the purple bottle on the left cannot be multifilled.

If a primary color is routed through the "Quicksilver" piece (with an image of a "Q"), one of the bulbs of that color will be filled with a new silver-grey color, instead of the routed color, on the next turn. This grayish fluid can be used as any of the six colors, thus making it extremely valuable. However, quicksilver only counts as one color in scoring. If you route a two-color combination (orange, purple, or green) through a quicksilver piece, one bulb of each of the two component colors will become a quicksilver bulb. Routing two separate colors through a quicksilver bonus (i.e. a red and a green) will also result in two bulbs of quicksilver.

The Quicksilver and multifill pieces can be used together provided that the color which needs to be multifilled was the next color to be filled regardless. This allows for a quick way to deal with multiple colors which need multifilling, without having to wait for more than one multifill piece.

You are scored on the value of the bottles you completely fill.[1][2] Time spent on the puzzle does not affect the score.

How To Play Well

Use as many colors as possible every fill, even if you only get one bottle of each color.

How to Booch It

Breaking all the bottles will get you the message "Booched Brew", followed by a "booched" duty report.

Note that this counts each layer of a multifilled bottle as an individual bottle. It is possible to get more than 11 this way. The message is still Voodoo, although the text is considerably larger.

Note that since there are only six colors (three primary, three secondary), the only way to get a Transmutation is to use Quicksilver.

Sometimes once you finish the alchemy puzzle the duty report doesn't show up and therefore the only way to finish is to forfeit the game, which you will recieve the same outcome as Booching the puzzle, producing only one hour of basic labour. 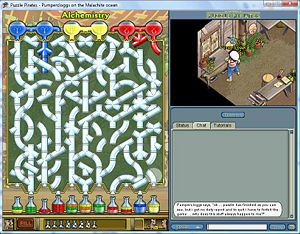 Alchemistry was introduced in release 2004-10-21. The move counter (which gave you 75 moves to fill bottles before the more valuable bottles broke) was removed in release 2010-03-09

The following trophies are related to alchemistry: