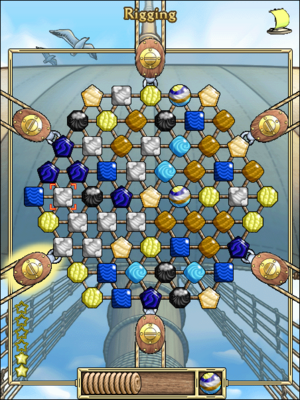 A typical rigging board

The rigging puzzle is a duty puzzle. Players' performance at the puzzle will accelerate or decelerate a vessel. It is an alternative to the sailing puzzle, and is started from the same place on a vessel. Sailing stations on a vessel are considered occupied while a player is using that station for sailing or rigging.

The board is a hexagonal grid of pieces, which can be moved in straight lines in one of six directions. There are 6 pulleys, one of which will always be active. The objective of the puzzle is to create large chains of pieces in front of an active pulley so they get pulled off the board. The active pulley changes in a clockwise direction after each move, regardless of whether a pull was made.

Scoring is primarily based around creating large pulls, while avoiding lots of small pulls. Efficient clearing of pieces will produce the best scores, and a performance indicator in the upper-right-hand corner is a good indication of how well a pirate is currently doing.

The sail on the left does not add much to the speed of the vessel, but the sparkling, golden sail on the right adds full speed to the vessel.

Clearing pieces faster does not necessarily affect scoring, but taking a long time between moves will decrease the score. "Looping" pieces, by surrounding them completely in a pull, adds a bonus to the score as well as additional loops to the rope coil. It is thought that not making a pull 3 times in a row does not penalise the score - but 5 loops are lost from the rope coil.

There are 8 normal pieces in rigging, two of which appear after the puzzle has been played for a while.

The rope coil with 8 loops

There are several special pieces in rigging which are obtained in different ways. These pieces will not be pulled by a pulley if placed directly in front of it.

Blockade rigging is a variation of rigging, played by puzzlers during a blockade, flotilla or sea monster hunt. Scoring maneuver tokens in rigging is a two-stage process. Bonus shapes appear on top of the normal rigging pieces. If the player makes a clear involving a bonus shape, the next pulley will be activated for that shape. Making a pull with the same maneuver as the activated pulley scores a token. If a pull is made which does not use that maneuver, or no pull is made, the maneuver is simply deactivated.

More than one maneuver can be activated at the same time, and any maneuver cleared while activated will score a token. If an activated pulley is used to pull a different maneuver, that maneuver will be passed on to the next pulley in line.

Bonus shapes only appear when a puzzler is performing well at the puzzle.

The following trophies are related to rigging: