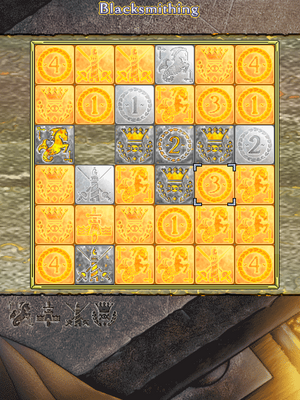 Blacksmithing is a crafting puzzle. It can be played in iron mongers. The puzzle is used to make swords and cannon balls.

The objective of the puzzle is to complete combos and to clear the board by striking each square three times. This is accomplished by following the symbols marked on the squares, either a number or a chess piece, on a square. When a square is struck three times, it is considered "complete" and may no longer be used. The crafting session is over either when all squares have been "completed" or when no move is available.

The player begins with a board of 36 red hot squares. Each square may be hammered on a total of 3 times over the course of the game. On the first hammering the square turns from bright orange to dark grey; on the second it turns silver; on the third the square disappears and is considered "complete."

The initial move may be made by hammering (clicking) on any one square. Which squares may be clicked next are determined by the symbol on the square just hammered as described below. Each time a square is hammered it is replaced by a new square stamped with a random symbol. This sequence continues until either all of the squares have been struck three times or there is no available move. When all the squares have been removed, that pirate has created a masterpiece to rival Mjolnir (Thor's Hammer). While some pieces may move like chess pieces, the objectives are: 1) To remove all the tiles by striking the tile three times, similar to removing the golf tees in a peg puzzle. 2) To collect Bonus Points for style and pattern. 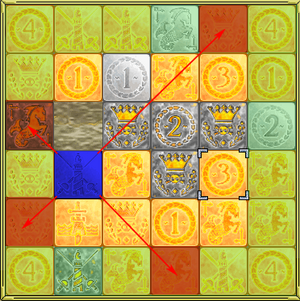 Hammering of chess pieces may only be followed by hammering the outermost squares, shown in green. For example, the Bishop(blue) which may only move diagonally may next strike any of the 4 red squares.

There are two sets of pieces in blacksmithing: numbers (1, 2, 3, 4) and chess pieces (Bishop, Rook, Queen, and Knight). They indicate what squares may be struck next. If the destination square is already "completed" or is beyond the border, then a move can not be made. The destination squares, if available, are signified by pulsating light. The Rum Jug is a wild card, allowing hammering of any square not yet "completed". The Rum Jug also counts as a wild card in any set or chain, so Knight Rook Jug Queen makes a Fancy Hammerin', and 2 2 Jug 2 makes a Bingo.

A number on a square tells the distance between the original square and the destination square. For instance, if the last strike landed on a 2, then a pirate may hit an available square that is exactly 2 squares away horizontally, vertically, or diagonally; the next strike may not land on a square in between.

The chess pieces have the same movements as they do in chess: The Bishop moves diagonally; the Rook moves vertically or horizontally; the Knight moves in an "L" shape (2 x 1 squares or 1 x 2 squares); and the Queen moves diagonally, vertically, or horizontally. The difference of piece movement in blacksmithing as compared to original chess is that, with the exception of the Knight, the pieces always move to the border and cannot stop on any one of the squares in between. The next stroke also may not fall on the same square as the previous stroke. For example, after hammering a rook on the right edge of the board it is not permissible to hit the same square again. See the diagram to the right for a pictorial guide.

Scoring is based on the degree of board completion and on two types of combos, chains and sets.

An easy way to score a skilled performance is by trying only to hit pieces which are the highest "layer". By working down one color at a time this helps prevent holes in the board which may end the game early and score accordingly low. Another simple strategy is to try not the use the edge pieces as much as possible since all the middle chess pieces other than a knight will need to use them.

For a more detailed look at scoring strategies Travidar's Ultimate Blacksmithing is a currently undisputed source for tactics starting early through to the ending moves of a blacksmithing game.

The first method is to hammer on the same type of piece multiple consecutive times to form a chain combo. For instance, hitting two 3s in a row will give a double, three in a row will give a triple, etc. This combo can be done with both numerical and chess pieces. Successfully executing these combos yields a message corresponding with the number of pieces of the same type hit consecutively: "Double", "Triple", "Bingo" (4), "Donkey" (5), "Vegas" (6+). No exponents on the Vegas are used; consecutive pieces beyond 6 simply yield more "Vegas"es.

The second combo requires hammering on each of one piece type, either numbers or chess pieces, forming a complete set of the same type of pieces. For numbers, if each of 1, 2, 3, and 4 are hammered consecutively, the game will give a notification saying "In the Rhythm". Correspondingly, by hitting each of the four chess pieces consecutively, the player will receive a notification of "Fancy Hammerin'". The set does not need to be executed in any particular order, i.e. hitting 4, 2, 3, 1 also counts as a set. Hitting the numbers in order from 1 to 4 or in reverse from 4 to 1 is awarded with a notification of "By The Numbers!"

Consecutive alternating complete sets of numeric and chess pieces with no other intervening pieces are awarded extra points. For example, completing an "In the Rhythm" combo followed immediately by a "Fancy Hammerin'" combo will generate "Ferrous!".

Blacksmithing has two types of progress indicators. The first one conveys overall completion. Each square on the 6x6 board moves into different stages of completion each time it is struck. The color of the blade in the background gradually changes from red hot orange to smooth silver according to the overall percentage of square completion.

The second one is a combo type and completion indicator. It is displayed on the bottom left hand corner of the puzzle board, embossed into the anvil. This indicator reminds the player what type of pieces have been hit in the past few moves that may count towards a combo. This information is displayed in one of the following ways:

At the first difficulty level only the numbers 1, 2, and 3 are present on the board. The player can score chains of a repeated number, sets of one of each of the three numbers, and "By the Numbers!" by hitting 1, 2, and 3 in that order.

At the third difficulty the 4 and Queen pieces are added to the board, and all of the game's scoring mechanisms work.

At the fourth difficulty level the Rum Jug piece replaces the last piece hammered of the hot(top layer) and warm temperatures (middle layer).

The following trophies are related to blacksmithing:

Blacksmithing started as part of the Grand Crafting Puzzle Project under the name "Knightfish". The original concept was designed by Aenor (Mat on the Viridian Ocean), who accredits Q-bert and Logic Mazes as inspirational sources. It was the first GCPP proposal selected to be introduced into Puzzle Pirates; the announcement for which came just 3 months before the puzzle was released into production. The prototype/beta version can still be played here.

The enabling of Blacksmithing trophies was delayed for roughly three weeks after the puzzle's general release, allowing time for the standings to stabilize. Cephalopod announced the trophy activation on the forums a few days prior to the reboot. [1]