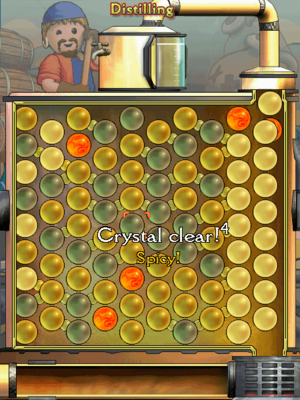 Distilling is the fine art of turning sugar cane, wood, and iron into rum. It is free to play one day a week.

There are three types of rum in the YPP world - swill, grog and fine rum. The distilling puzzle is used to make all of them, plus hemp oil and mugs.

In the distilling puzzle, there are three main types of balls (white, brown, and black) which represent parts of the mixture to be distilled into rum. There are also orange spices, and burnt white pieces are added if any white pieces are wasted.

Pieces are arranged into columns which periodically move one place to the right across the screen, the right-most column either going up into the rum or down into the furnace, and new pieces appearing on the left. Whether the right-most column goes up or down is determined by the number of white versus black pieces in the column; if the whites (including burnt whites) equal or outnumber the blacks, it goes up. If a column contains only brown pieces, it will also go up.

How to swap pieces

The quality and progress of the rum being produced is represented by the container on top of the board. The more brown and black pieces that go up, the darker the liquid becomes; if only white pieces are sent up, the liquid will be clear (hence the name for columns of pure white). When twelve columns have been sent upwards, the liquid reaches the top and the puzzle ends (if the columns weren't 12 consecutive 'Crystal Clears', described below).

It is possible to improve scores further by sending up consecutive, rather than separate, pure white columns. The more crystals clear columns sent consecutively, the higher the score.

The quality of the labor that is produced (basic, skilled, or expert) depends on how the score compares to the scores of others that have played the puzzle. Different distillery products require different quantities and qualities of labor.

The time to complete the puzzle has no bearing on the puzzle's score. Abandoning the puzzle after several pieces have been moved affects that pirate's standing negatively. Even if no moves have been made yet, abandoning a labor puzzle in a store that has orders causes that pirate and the store to lose a labor hour. By playing in a store with no orders, pirates can cancel any poorly-generated distilling boards without wasting their labor hours or slowing down a distillery's orders.

Getting two Crystal Clears in a row is called a 'Crystal Clear^2', which players abbreviate to CC^2. In normal circumstances, the game ends immediately after the twelfth column is sent up. However, if a player manages to get a chain of twelve Crystal Clears (CC^12), the puzzle continues until a column that is NOT 'Crystal Clear' is sent either to the rum or furnace, allowing even longer consecutive CC combos (CC^13, CC^14, etc.) and better scores. This ONLY occurs after doing a CC^12 and in no other situations (i.e. sending a CC^10 and after that a CC^2 will NOT allow the player to continue). While getting a CC^12 or higher takes considerable speed and dexterity in moving the pieces as well as the ability to make strategic decisions quickly, there are many distillers who achieve CC^12 games regularly; top distillers are able to achieve a CC^12 or higher more than half of the time.

After achieving a CC^12, expert distillers challenge themselves further by trying for a higher CC count or reducing the time used per game, often below three and a half minutes. (A slow game may take around eight minutes.) Some very competitive distillers also attempt to record CC^12 games with the maximum amount of spice used, while keeping wasted spice to a minimum.

The key to improving at distilling is to set for oneself suitable goals. Initially, one should only attempt to ensure that no white pieces are wasted and no black pieces sent up, by assembling columns consisting only of white and brown. As one becomes more familiar with the way in which pieces swap, one can move on to attempting to create columns of pure white, incorporating spice pieces where possible.

Only having reached this stage is it useful to attempt to construct consecutive crystal clear columns. Initially, whites on the far right of the board can be used to make a single crystal clear, and this will buy some time with which one can attempt to make consecutive CCs with the rest of the board. After being able to construct CC^2s and CC^3s, the practice of dragging pieces rather than click-swapping them will start to become both necessary and more intuitive. It should become clear that the best way to construct a long string is to initially shift white pieces to the left, then when the block of white approaches the final column, start shifting the newly generated white pieces to the right to add on to the white block. At this point one must keep an eye on the furnace in order to avoid attempting to build a final crystal clear column when there is not enough time to do so.

As one's abilities improve, so the number of consecutive crystal clears one is able to construct increases, until a skilled distiller may send up the 12 columns in just two groups, perhaps a CC^4 followed by a CC^8. With practice, one can gradually increase the number of consecutive crystal clears sent in the first group, until the key point of sending up two CC^6s is reached.

Moving on from this point towards the eventual goal of achieving a CC^12 is extremely challenging, and it is only at this point that the many expert distilling videos (see links below) will prove instructive.

The algorithm used to determine where spices are placed has no sanity test and will, on occasion, create non-spice pieces that are completely surrounded by spice pieces and/or the top/bottom edge of the board. Such pieces are completely immobile and may make playing a perfect game during that round impossible.

The following trophies are related to distilling: