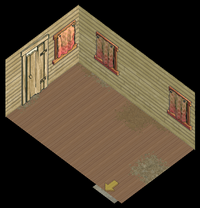 A room, in a shack, an example of a scene. 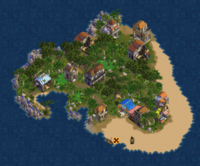 An island's surface is one large scene.

A scene is a virtual space in the game. Pirates can interact with some scenes; for instance they can walk around on an island, and place furniture in a building belonging to them. All scenes comprise a number of 2D tiles.

A scene can be:

Scenes are linked by yellow portal arrows on the ground. Many scenes collected together form locations such as buildings and ships. The outdoors of an island is one large scene. 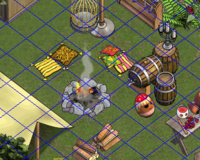 A scene overlaid with a grid showing the position of floor tiles. Objects are visible on some of the tiles.

Parts of a scene

There appear to be two main types of scene within the game. It is possible to distinguish between the two according to how they handle the /speak chat command:

In rooms, pirates can communicate using the /speak command. In outside scenes, pirates must be part of the same chat circle to speak to each other (or they must use other chat channels, for example tells or vessel chat).

Pirates, pets and NPCs can all move around within scenes. However, without player intervention, it is thought that pets and NPCs cannot move between scenes. The known exceptions to this rule are NPCs found on limited edition ships such as the Phantom class sloop, which may move within scenes and between scenes on the ship. Pirates may move between scenes using the yellow portal arrows on the ground. There may be a small delay between clicking the arrow and entering the scene, as the new scene must be loaded.

Pirates, pets and NPCs cannot traverse tiles containing objects such as furniture, charm or buildings, nor can they traverse tiles containing certain types of terrain such as lava or water. However, in many scenes, such as rooms or outdoors, a path can be found to move between any two unoccupied squares. If this is possible, the pirate, pet or NPC will walk there; if not, pirates will receive a message stating "Avast! I can't find a way to walk there.". To access different decks of a ship, use the yellow portal arrows by the steps.

To move around, simply choose somewhere to go and click. If there's a path, and there's room to stand, then your pirate will set off towards the destination at a leisurely pirate pace. Similarly, to inspect something, simply click on it. For instance, clicking on a pirate will bring up the radial menu with options to view their info page or challenge them to a puzzle, among others. To hop between scenes, use the yellow arrows on the ground.

Some interfaces, like the dock, allow pirates to hop between islands. Pirates can also invite each other to another scene using /invite. Use /job to whisk pirates aboard a ship. Finally, to return to your pirate home, click to home on the Ye panel.

To move your view of the scene around, right click somewhere within the scene. This pans the view to center on where you clicked, if possible, but it will not let your pirate to go out of sight. The view will automatically center on your pirate's destination if the pirate has recently moved. Should your pirate's destination take him or her off your screen, fear not! The view will automatically center on the pirate the moment he or she dissappears from the current view.

Pirates, pets, and NPPs follow simple zig-zag paths when walking, and cannot move diagonally; each tile in a path must be adjacent to the one which preceeded it. Additionally, only the tiles currently in view of the pirate at the time are considered when planning the path. Thus, journeys across large or complex scenes (for example, outdoors) must be made slowly and in small stages, scrolling to reveal the next segment of a path at each stage.

If the destination is a portal arrow, and no valid path can be found, a pirate will "warp" - travel immediately - to that location shortly before exiting the scene. This is also true for interactive objects which have been clicked on, unless there is no room around the object - in which case the pirate will interact with it but not move. Pets which are following pirates will also do this.

Players can edit many scenes in a number of different ways. For example, building owners and ship deed-holders may arrange furniture and paint some scenes. They may also set pets to roam in some scenes.

Island governors may add pets to an island, and may place buildings.