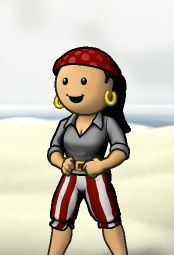 Karajean is the captain of the crew Black Horizon. She is a member of the flag Hurricane on the Cobalt Ocean. She has been playing Y!PP since May 16, 2006. All of her female pirate identities go by the nickname "Kara".

Karajean began her pirate life on May 16, 2006 and quickly developed a love for the game and its many challenging puzzles. She quickly joined a no longer existing crew and flag and introduced her brother, Miteymike, to the game. Kara eventually found a lasting home in the crew Black Horizon, under the flag Hurricane. Here she learned many things about Y!PP from leading pirates such as Edwardteach, Funkyjeff, Captainsassy, Bnavver, Aarghbird, Kater, and many more. The most important discovery was that the best part about the game was making friendships and having fun. As her skills and ratings grew, so did her popularity in the crew. At this point, Kara had no alts.

The next milestone was to become subscribed, but she was not allowed due to her parents' rules. As some of her favorite mates began to disappear from the ocean and the crew fell into bad leadership, many of her favorite leaders created a new flag, Mixed Nuts, in December 2006. At Christmastime 2006, Kara's father agreed to pay for her subscription as a Christmas present and the fun began! Kara hated to leave other mates and a strong leadership in Black Horizon to join a more comfortable world, so she saw the need for alternates. Specialkara was born and joined the crew Rum by Gum. Eventually Scarykara was also born and joined Silence, a no longer existing crew. Her three pirates quickly became officers in their own crews.

Kara noticed that there was a special crew on the Cobalt Ocean named Christian Warriors. She became interested in joining because of her religion, but needed another alt to do so. She also saw that the downside to having multiple players with no connections was transporting things from one alt to the other. Henceforth, Kara opened another Y!PP account and Soldierkara came to be. She joined the crew Christian Warriors, under the flag UNITED CHOCOLATE LOVERS.

During the same time of hardships in Black Horizon, a very good friend decided to leave the crew and create his own, White Dawn, and joined Hurricane. About this time, Silence began to disappear. With pressure to join her friend's crew and leave a withering one behind, Scarykara moved to Rum by Gum and Specialkara moved to White Dawn. After a few weeks, White Dawn created a new flag, Fear of The Dark. Specialkara quickly created a flag forum and became a lady of the flag. However, the new flag eventually disintegrated as most of its members became dormant.

Specialkara joined the crew Black Beard's Ghost because Kara wanted another pirate in Hurricane and she had friends in it. Karajean completed her dream of owning a stall in the late summer of 2007. She now manages Captainsassy's Weaving Stall on Lima Island, owns her own tailoring stall on Lima, and her own apothecary on Terra Island. With growing pressure to have another alt in Mixed Nuts, Strangekara was born in the fall of 2007 and joined the crew Garbage Scowlers.

Throughout this time, Kara became interested in creating alts on every ocean upon reading Azumanga! Midnight, a webcomic staged in the Midnight Ocean. Her name, Karajean, can be found on every ocean, but she thrives on the Cobalt Ocean.

Ratherdashin came onto the scene in late 2007, when Karajean realized she would enjoy having the asset of a male "model" to aid her in designing male outfits to place on the rack at her tailor stall. He also helps turn clothing into rags through use and wear, as many pirates are often interested in buying rags as opposed to actual clothes.

On February 3, 2008, Karajean fulfilled a goal when she was promoted to the position of senior officer in Black Horizon. The next month, on March 17, Scarykara was promoted to fleet officer. On July 25, 2008, Karajean was named the captain of Black Horizon because the past captain, Captainsassy, decided to leave the game. After another close friend decided to create their own crew in 2008, Specialkara was moved to Monkey Knife Fight of the flag National Pirate Radio and Strangekara moved to Specialkara's spot in Black Beard's Ghost.