The governor of an island has the power to place buildings and charm. Upon appointment to the position, they also get the deeds to the infrastructure buildings present including the bank, commodities market, estate agent, fort/palace, housing, construction sites and bazaars. If the island is an outpost island, the shoppe deed also transfers. Any of these deeds can be given to the pirate of their choice, but they immediately transfer to the new governor if another is appointed. The palace deed also conveys the power to change the tax slider.

In some ways, a governor is an island-owning flag's ambassador to the public. Their name is on the Island tab, and it's likely that they will receive many questions concerning the island and their flag's plans for it. The governor also has the power to change the news on the Island Events tab of the noticeboard.

Governors can be from the island's controlling flag or outside of it as long as the royalty votes the change through. On subscriber oceans, governors were previously thought to have had to be subscribers, but this was disproven by Notorious Fandango in their governor-go-round event.

When an island changes hands in a blockade or by transfer, the monarch of the controlling flag is installed as the default governor. If a flag has no monarch, the governor is chosen randomly out of the current royal members of the flag. Potential governors can be proposed using the "Propose Governor" button on the controlling flag's info page. A majority vote of flag royalty is required to change governor.

On the Obsidian Ocean, governors have the authority to close any shoppe on the island. Shoppes closed for 14 days will be dusted. 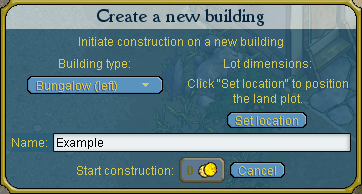 The dialog box for creating a new building.

In building placement mode, the footprints of existing buildings are visible as white lines. The proposed building's footprint is outlined in blue if the location is acceptable, and red if it is not. (Acceptable locations do not overlap other buildings or water. Note that the ability to place a building does not mean it will be accessible by walking or that it is placed in an attractive location.) The location can be set as many times as necessary, and there is always the option to cancel. After the location is set, the Create Building dialog box returns.

Tiles that can not be built over

When the governor is satisfied with the building type, location, and name, they can start construction, creating a new construction site. The deed will be found in the governor's inventory. There is no 'undo' button once a building has been placed, so it is critical to place the building correctly! 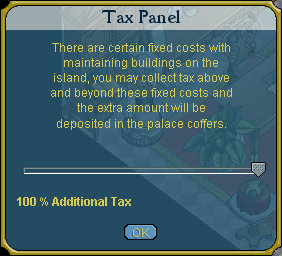 The interface for Palaces and Forts is very similar to the standard shopkeeping interface. In addition to the usual Manage Inventory, Trade Commodities, Market Bidding, and Manage Prices screens, Palaces and Forts also allow the governor to set the tax rate. (Previously, the island's Navy was under control of the governor. That control was removed with release 2005-02-11, but there is still a Manage Navy panel.) Palaces and Forts do not make any products, but buy and sell prices may be posted for any item provided that that item has been in the hold at some time in the past.