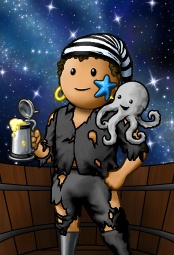 Empathetic is a pirate on the Obsidian Ocean, Meridian Ocean, and Emerald Ocean. He is currently captain of the crew Peaceful Protest on Obsidian, Sugar and Spice on Emerald, and Operation Cast Lead on Meridian.

Empathetic started the game in early 2011 on the Viridian ocean, which inevitably became the Meridian ocean soon thereafter. Upon his new found creation, he quickly realized his knack for Drinking, picking up his first familiar in automated tan drinking tournament within the first two weeks of him playing. After losing to Orionxd in the following tournament, he befriended him and soon these two pirates became near inseparable, always challenging each other to Drinking matches. Orionxd helped refine Empathetic's abilities as a Drinker and helped him become more consistent. To this day he still strives to be the best he can at Drinking, usually holding the rank of either Legendary or Ultimate.

Soon after meeting Orionxd, Empathetic met Whitehaze/Whitehazed and Captainrich through Orionxd in the new crew at the time, Bad Girlfriend. Soon thereafter reaching fame, Bad Girlfriend grew into the flag Dilemma. Over the next few months, Empathetic learned how to Bnav in Blockades due to Dilemma's yearn to blockade. Through blockading, Empathetic grew to know it's members, including, but not limited to Broska, Satisfies, Cheeseplayer, Sheco, Chillii, Elfeesh, Iameric, Jimbycool, Aniitaa, Disengaged, Shadowy, Allixia, Powerbow, Convict, Seepnah and Goldschmidt. To this day he still keeps in contact with most of these members. However, due to the storyline of how Dilemma played out, Empathetic soon became split between the newfound Meridian and Emerald oceans due to half of the flag moving. Empathetic went from Bad Girlfriend to Deafening Silence before the time of the split.

At this point in time, Empathetic made a bold choice to stay at Meridian for the time being, for it was his home ocean. However, with the split of Dilemma, Empathetic was soon left with a dormant flag. It wasn't until he befriended Andrix on an Atlantis citadel run that he found a new flag. Empathetic had made the executive decision to move Deafening Silence to become a royal of the new found flag Rapture, under which Andrix lead and Martobain, and Chillii were royals. With Empathetic's basic expertise of blockades, he helped Rapture take control of Corona Reef for (according to Andrix) over a year; Empathetic and Andrix swapped governorship of Corona Reef whenever each other was busy with real life complications. However, due to real life commitments, Andrix retired himself, leaving Empathetic once again with a dormant flag.

Seeing as nearly all of his Dilemma buddies were now on the Emerald ocean, now including Chillii, Empathetic sought out to reconnect with some of his old Dilemma friends. Odd enough, the only two left that were together in the same crew and flag, were Cheeseplayer, now renamed as Haterade, and Satisfies. As Empathetic was about to join his old comrades, Haterade had a falling out with Satisfies over personal issues, and he, along with Tequilashot established Just The Tip, where Tequillashot lead and Empathetic became a royal along with Haterade and a few others. Over the following few months of the Just The Tip saga, Empathetic refined his abilities concerning blockading, including war brig and frigate navigation, as well as the mechanics of blockading. To this day, the only position Empathetic has not officially done during a blockade is the BA, or Battle Admiral. Furthermore, due to the fortune that Just The Tip had in it's blockading skill, Empathetic learned hands on duties of being a governor, including, but not limited to, taxes, spawns, stock, and building shoppes. Just The Tip, however, also had a split due to internal disagreements between the leaders, and with the disbanding of it's lead crew, RIP Pillaging, Just The Tip became a semi-dormant flag.

While under Just The Tip, Empathetic decided to become a multi-ocean player. Around the end of Dilemma, Empathetic became part of Bacon Strips, but as more of a dormant player. He helped, assisting in few ways, mostly small ship navigation in blockades, or LA (Land Admiral), and/or JC (Jobbing Captain) when the flag needed it. Bacon Strips consisted of several Dilemma players, in fact, the only players not apart of it are Satisfies, Haterade, Disengaged, Broska, and Goldschmidt - all of which whom remained on Meridian or retired. Bacon Strips went dormant in the Fall/Winter of 2012 of blockading due to the leaders preparing for college courses in real life. However, in the Summer of 2013, after Just The Tip had broken up on Meridian, Bacon Strips made a comeback to the blockade scene, where it remains today. As a result of the revived Bacon Strip team, Empathetic has befriended Cremate, Sdafda, Iiris, Fry, Mstrshredder, and Ovulate (a newfound Drinking friend). Empathetic is now a proactive member of Bacon Strips, still assisting what he learned from Dilemma and Just The Tip, mostly blockade navigation and preparation of all sorts. To this day he still currently battle navigates for the Bacon Strips team, but also assists with flags such as Corruption on Meridian, a flag established by Convict and Powerbow. Empathetic has befriended Bellah and Forever/Loathe through Corruption (though he met Loathe on Emerald upon his arrival). Empathetic also befriended Lordbaelish on both oceans with Subtle Tease and Meridian's Most Wanted due to common likes and goals concerning blockading.

After a hiatus with a gruesome battle with Penguinbr on Meridian over a couple months on the blockade board, Empathetic decided to take a break from the game, only logging on for drinking tournaments for a good six months or so. After awhile, he befriended a pirate named Pellaeon and decided to join his crew I Don't Care and the flag Scupper under Armyboy.

Scupper was a fairly aggressive flag under Armyboy, and Empathetic enjoyed working with them given the ship navigation time they gave him in blockades. With a renewed spirit to play the game, every week to every other week, he enjoyed working with his new team and new friends. Here is where he met people like Squats, Aceyy, Gwen, and a few others. Like all blockade savvy flags, inevitably, the flag disbanded over issues regarding the future of the flag, and the leadership under Armyboy.

After the disbanding of Scupper, Empathetic went crew-less for awhile, as Pellaeon went on hiatus. To his good fortune, Gwen offered him a position in the crew Pretty Pink Kitten Kiss, a non-competitive pseudo-retired crew in the flag Red Solo Cup, led by Tieguy. This flag would mostly do Sea Monster Hunts, and after Blockades grew boring for Empathetic, Citadel Runs became something he greatly enjoyed navigating. In doing so, he also met the pirate and friend Shroomy, Ccarlson, Ameer, among others.

After awhile, Squats in the crew Just Kidding reached out to both Gwen and Shroomy, and persuaded them to join his crew for fun, minor blockading, and Sea Monster Hunts. With them both going, Empathetic decided to tag along. After awhile of being flag-less and Squats retiring, the crew decided to start their own flag, with Empathetic coming up with the name Fight Us Cool Kids (namely because of the vulgar acronym). Pellaeon also came out of hiatus to join the crew, and with him coming back, blockading became a little bit more regular.

With Squats getting banned and disagreements on who would take over Fight Us Cool Kids, Shroomy decided to make a crew, and got an offer to join up with Hysteria with the royals, Mostwantmee, Trilian, and the leadership of Jasperc. Both Gwen and Shroomy were thrown into the royal team, with Empathetic retaining titled member. At this point in time, it should be noted that Empathetic and Gwen started dating, because of the large amount of time they spent together, combined interests, and many laughs they both shared. The goal for the flag became blockades, with Sea Monster Hunts on the side. Eventually Avallach joined the flag and took Shroomy as they began to date, under the crew No Pain No Gain. With Avallach wanting to be involved, both he and Empathetic got bumped up to royalty. After many months of cading, Jasperc had an emotional breakdown over Gwen, and it clouded his judgment on many matters, to the point that the rest of the royal team ousted him. With that major blow, Hysteria wavered a bit before ultimately deciding to disband over rising tension.

At this point, Empathetic and Gwen decided to start their own private crew named Sugar and Spice with Shroomy initially joining. Dazeyinez offered a flag named Cunning Stunts to the group. With Tieguy on hiatus, both Ccarlson and Ameer joined the flag as well. The flag's main goal was relaxation and occasional Sea Monster Hunts. For awhile, the flag dabbled with blockades, and at this flag, Empathetic governed Barbary island. After the blockade stint, Shroomy left with his boyfriend Avalach to continue his push for governing islands. Cunning Stunts remained a private flag where Gwen and Empathetic operate whatever activities they want to do from there on.

After another hiatus, with the Obsidian Ocean announced, Empathetic looked for a new change of pace. With the opportunity of restarting and recreating a pirate on a new server, he decided to migrate to Obsidian largely due to the stagnation on the previous two oceans. Here, with his loving partner Gwen, he created the crew "Peaceful Protest" largely in part due to the political climate of the United States in early 2017.

With a new ocean, Empathetic quickly joined his old flag mates from both Meridian and Emerald in the flag Amateur Hour. The flag had phenomenal potential with many powerhouse pirates and crews, it was at one point the number one flag on Obsidian. Empathetic retained a royal role for a short time, before disarray began due to too many royals and competing visions clouding the overall goal of the flag. Due to personal differences and attacks from unnamed royals of the flag, Empathetic left to create his own, quiet flag where he once again could do whatever he wished. At this point, blockades were not yet active on the new server, and as a result, it made more sense to be in a quiet flag until the blockades kicked off on the new ocean.

After Obsidian fizzled out with Amateur Hour among other flaws with the server, Empathetic took a hiatus once again focusing on his IRL career, finished university, and moved in with his long-time girlfriend Gwen. With COVID-19 picking up worldwide, Empathetic once again turned back to his old hobby. This time, teaming up with an old friend Armyboy, Yachts, Enthusiast, and Hobomate, he pursued a blockading campaign with Armyboy at the helm - this time without disagreements with Pellaeon on the royal team. Under this flag, Empathetic was able to rebuild missing plots on islands such as Arakoua, Bowditch, Scrimshaw, Sayers Rock, and Armstrong island. He also was able to continue his hobbies of Citadel running and time on the blockade board with partnering flags like Insurgence, Grow Up, No Bamboozles, and Black Flag. Weekend cading became the norm with foes such as Bacon Strips 2.0, Full Send with Pellaeon, Symond Says with Joshsivils, and The Movement with Adrien (Broska & Lordbaelish). After a restructuring with a friendly flag Canada, Monarch Redshorts joined the royal team. Furthermore, after an internal strife with Blacklist, Xpac and Princessmg also joined the royal team.