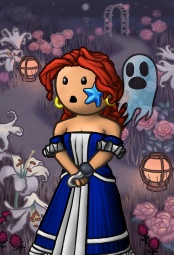 Trilian is currently queen of the flag Hysteria and the captain of Rising Hysteria on the Emerald Ocean.

Upon the seven seas there sailed a lass

With eyes like fire to scorch away the soul

Some evil deed has made this come to pass

To make her smile can be my only goal

I write these words in hopes to lift her mood

I'd tell her she is beautiful and more

But fear those words might come across as rude

But still her slave girl outfit I adore

I long to see her dance and see her smile

No one so lovely should have cause to frown

That face was meant for laughter all the while

And in such lovely laughter I could drown

I know how hard and loathsome life can be

But please, my lady, smile just once for me.

Trilian washed up on the shores of Aimuari Island in July 2007. She was created as an alt for Dollybelle after she met Zaphod of The Tiger Sharks which are both characters from the book Hitchhikers' Guide to the Galaxy. (Note: The Trillian of the book is spelled with 2 L's, but this name was not available). She was not very active until one fateful night in late September, when she was playing poker and met Timeshank of the crew Powerful Fireblades. She was captivated by his dashing manner and was persuaded to join and help build the crew. She was then promoted to officer, then senior officer. Trilian and Timeshank fell madly in love, and were married on October 16th, 2007, at a private ceremony on the beach outside their cottage on Alkaid Island. After numerous protests, they had a second ceremony with family and friends at their manor on December 7, 2007.

In November of 2007, after the demise of the flag YPP - Your Purdy Pimps, they formed their own flag, Time's Revenge, with Trilian as monarch, and Timeshank as prince.

After Timeshank's mysterious disappearance in Spring 2008, Trilian bounced from crew to crew, helping out various mates establish crews. She became more active on Dollybelle again, and gained royalty in Dragon Slayers. She became frustrated with the way the flag and crew were being run, and jumped at the chance to join fellow senior officer and good friend Yarrh in forming a new crew, Dragon Booty, using Trilian. After a heated argument with the monarch of Dragon Slayers, they decided to form their own flag, Dragon's Blood. They quickly rose in numbers and fame, surpassing that of their former flag and crew.

After Yarrh became less active in the game, in January of 2009 Trilian became captain of Dragon Booty. The crew moved to other flags for a time, then joined Saints And Sinners, where Trilian became monarch in July, 2009. She served as governor of both Paihia Island and Iocane Island during her reign.

In spring of 2010, Trilian joined the crew Shakedown in the flag Securely Fastened, and served as a royal. She was a founding royal of Clandestine in Fall 2010.

Other flags since 2010 (not necessarily in order): Illusion, The Final Boss, Been There-Done That, Delirium, Here's The Thing).