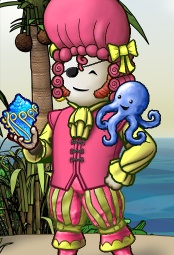 Seepnah is a pirate on the Viridian Ocean. He is the captain of the crew Cruentus Morpheus, and king of the flag RiddleMakers. He loves Pink, a lot.

As of 2018, Seepnah is listed as Amateur Hour's "Lead Safe Zone Sloop Bumper" on the Obsidian Ocean.

Seepnah was washed up on the shores of the Viridian Ocean in February 2006. Originally spawning on Sakejima Island, in the Jade Archipelago. It is said that is the reason he has such a passion for pink, the color of the Sakejima Navy being pink.