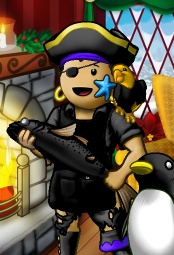 Powerbow is a fleet officer of the crew Banana Peel on the Meridian Ocean. He is also a prince of the flag Apple Core, and the governor of Garden Cradle and Viridis Island.

Powerbow washed up on the shores of Viridian sometime in November 2007. Somehow finally finding old crewmates such as Astrida and Mollybaby, he quickly went to join them in Hellas under captain Crx.

After some mishaps and controversial captaincy, a select few from the crew decided to form together, creating the crew Outtamyway (which is now Chaos' Destiny). Mollybaby took leadership of this fine crew, rising it through the ranks. Since then, captaincy has been passed to Astrida, who has then passed it to Powerbow.

During his spare time (which he has a lot of), he enjoys navigating Citadel runs, blockading and having a good chat.

Powerbow has been involved with the following blockades: