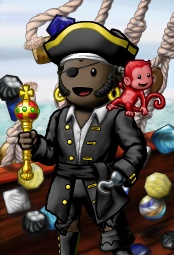 Andrix is a senior officer and flirt of the crew Mercenaries and a member of the flag Get Off My Lawn of the Meridian Ocean. He also is governor of the island Corona Reef.

Andrix started life as a pirate on the Hunter Ocean on October 17, 2011. He moved over to Viridian the same day since that was the ocean he used to play back in 2005. Andrix spawned on the docks of Tigerleaf Mountain which has always remained his favorite island. He found the flag RiddleMakers when an interesting pirate named Hunta walked passed him on the docks of Lima. Andrix then asked if he could be lucky enough to join Hunta's crew called Long John Silver. Hunta was also the king of the flag RiddleMakers. Andrix then joined the crew and became a pirate.

Andrix worked hard on his stats whilst Hunta showed him the way around the ocean and also gave him training and tips on a few various puzzles. Andrix then progressed through the ranks until he finally hit senior officer rank. This was his greatest achievement yet. Andrix began taking part in his flag's blockade by XOing for some of the greatest battle navigators Viridian has ever seen. Andrix enjoyed his job as an executive officer as it was good to be involved in a flag event.

Five months into RiddleMakers, the flag was slowly becoming dormant, and so as Andrix was only just becoming a true pirate, he ventured out of RiddleMakers and began to make his own crew and flag in January 24, 2012, This was when the crew Too Legit To Quit was born on the Viridian Ocean.

Andrix made the flag Light Grenades on February 2, 2012, which didn't achieve much at all. The flag had an ambition to blockade but never followed it through. Andrix reached the stage where he realized that the flag wasn't going anywhere so he put it into early retirement since nobody was active. Andrix then set out to pursuit his own ambition to blockade navigate. It was here he first introduced himself to Maltby and his friends. He then learned to MAA citadel runs for Maltby and began to make his own pieces of eight. It got to the point where Andrix expressed his ambition of blockade navigating to Maltby who helped him by putting him in the blockade team. Andrix got taught to blockade navigate by Aethonx one of the old royals from RiddleMakers who is now in the flag Dirty Thoughts. Andrix's first blockade navigating experience came when he was untrained and it was for Anchovia with the flag Subtle Tease. This was where his ambition began to start happening. Andrix then had his first real blockade at Hadrian for Maltby which was against the BK Jinx on March 10, 2012 with Gun's Blazing. Andrix navigated a frigate in that blockade and put down a Jinx frigate and a dhow.

Andrix navigated his first real big blockade for Gun's Blazing against Antheas as they went for Dendrite Island on April 7, 2012. This was the best blockade Andrix ever navigated. He shot and sank two Antheas frigates and 4 Antheas brigs. To this day it remains one of Andrix's favorite blockades he Battle Navved in.

Andrix then went on further into blockade navigation and it became more of a constant thing. Every weekend Andrix was battle navigating for various different flags.

There became a time when Maltby's flag Gun's Blazing broke itself from the inside and so Andrix went and spent a week in the flag Artic Scientists. That week was very relaxed no politics no fights no drama. But then after a week break, Andrix rejoined Maltby's new flag Inglorious Basterds after some persuasion from Maltby and his flag. After spending a few weeks back in Maltby's flag, the same events happened all over again and Maltby's flag died once again. So Andrix went in search of finding somewhere new and this is where he found his hearty Riss. She was Princess in a flag called Serenity, It looked to be a really good place to be so Andrix joined and became a senior officer in Riss's crew Sweet Surrender. He stayed in serenity for a few months and became a prince. It was his job to work with the pirate Krueger on the blockade team. After being in Serenity for a few months time, Andrix released it wasn't the flag he belonged in.

Andrix made himself a new flag and called it Rapture. This is where big things happened for Andrix. A few weeks into making the flag the pirate Martobain joined with his friend and buddy Tom the Elephant. And then a few weeks following Martobain's arrival, Empathetic and Chillii both joined with the crew Deafening Silence. Rapture's first blockade was on June 2 which consisted of defending Polaris Point from third partying. The blockade was against the flag Against All Odds defending for the flag Aphrodite's Scorn. The blockade was a successful win 3-0. Andrix had a really good blockade team for this blockade. He had Sheeran, a well experienced blockade navigator. Sheeran helped Andrix run the blockade.

Rapture went on to further success on June 9, 2012, Rapture blockaded Corona Reef and won the blockade 3-0 against the BK Jinx and two other flags Mortus Linea and CROSS MY HEART. Rapture have held the island ever since. Andrix made the decision to change his flag name. He renamed the flag Adios Mother Frigate.

Andrix continues to blockade navigate every weekend and enjoys running Haunted Seas and Atlantis runs. He also likes to job for many too.