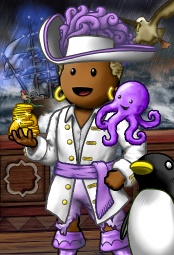 He is now officially retired.

Broska started his pirate life on Puzzle Pirates in early February 2010. After a lot of hard work he became a senior officer in Booty-Robbers. He became active in blockades early in the November of 2010, starting with a single XO spot. He soon took a break because of a death in his family and his account was deleted. But nothing could keep him away from his new found love for blockading. He soon resumed and remade his pirate.

Later on, Proof, seeing Broska's potential decided that he would take Broska on as a jobber contact for his recently renamed flag, New Ocean Order. Broska soon earned the position of royalty in this flag, and became close friends with Ogjay and Proof. However, this friendship was not to last, and Broska and Proof would soon leave New Ocean Order to join several flags. The last of these flags was Dilemma, where Broska and Proof spent some time. Proof took a break, and Broska traveled over to Legacy were he became close friends with Avienda, and where Qvintus taught him how to successfully board admiral. Broska soon decided to leave, and to take over his sweetheart's crew Eye of Harmony. Using it, he made the flag Blink. With Blink and flags such as Just The Tip he would pay for hundreds of cades across Meridian, giving a prosperous time to the ocean. Broska continued to expand his career over to Emerald Ocean and was a royal of the first flag to win Admiral and Aimurai in the same flag. He is currently retired.

Has served in multiple positions estimated around 399 blockades.