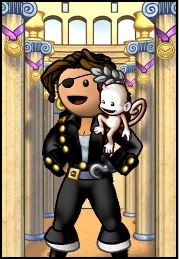 Ccarlson is a pirate on the Emerald Ocean. She is senior officer of the crew Villains and a princess of the flag Cunning Stunts. She is an avid Atlantis Hunter, and continues to MAA and Navigate them.

Ccarlson started playing in October of 2010 on Sage and joined Boiwonder's crew Greenie Harem as senior officer. She then left to make a crew with two of her friends. They joined the flag Rising Storm and Ccarlson was awarded royalty rank along with Purplelove, Hawx, and a few others who joined the flag.

She left Rising Storm to join her friend Pinke in Illium Eternae and was there as a titled member until July of 2011 when she left to make her own crew, Ultimate Lazers. She moved to Eternal Glory and rose to the position of Royalty by August as well as renamed her crew Arcana Imperii. During her time in IE/EG she governed Kashgar and Kasadim.

In September of 2011 she met Cartrunner and along with Soulsearcher, Cheekylili, and Jenx they remade No Offence Intended. Spending most weekdays SMHing with Mil runs or Junk ""Chit" runs NOI finally raised enough PoE to get into the blockading business. In October of 2011 they blockaded and won their first two islands, Albatross (VS Critical Mass) and Ambush vs Illium Eternae. She governed Albatross Island for a few weeks in October before passing it back to Soulsearcher.

Finally, in November of 2011 Ccarlson parted ways from NOI and her crew (Which was renamed Challenge Accepted once she had left) and went through a variety of crews/flags until she settled with her newly formed crew Chum the Waters which she made with Luigi. As of the March 2012, they resided in the flag Exposed. She passes her time there playing poker, pimping out ships, helping out in blockades, and SMHing. Since being expelled from Exposed, she has bounced between several flags and crews. Her three main crews that she bounces between are Pretty Pink Kitten Kiss, The Chat Boochers, and the soon to be renamed back to Chum the Waters.

Ccarlson has helped out in a number of blockades. She first started blockading in Spring of 2011 when helping to XO for Illium Eternae Since then she has been XOing almost every weekend as well as recently either JCing, BAing or LA/VAing.

Ccarlson first JC'd/LA'd with No Offence Intended at their attacks on Ambush/Albatross in October of 2011.

She first BA'd at Bowditch helping Hardcore Explorers attack Black Flag in December of 2011. They won the island and then proceeded to defend it 2 more times in January of 2012 before letting the island go to No Apologies. She hopes to continue BA'ing sometime this summer.