A bottle of the sunken sloop, Dedicated Chub, in a trade window

Ship salvaging is the process by which the ships that are sunk in battle can be restored. At the time of sinking, the deed-holder will be granted a bottle containing an image of their sunken ship. The bottle dusts after 60 calendar days. 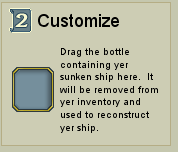 The shipyard interface where players have to drag the bottle of the sunken ship from their inventory to get it repaired.