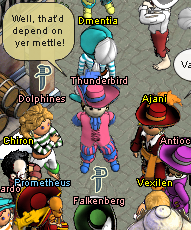 A group of helpful, pink-named greeters.

Greeters can regularly be seen on the docks of islands where greenies start out, answering any questions they might have. Greeters are often also responsible for running special tournaments and greeter pillage trips for greenies to help them become more comfortable with the game. Greeters may run other activities for greenies and whatever they can to help them out and get them having fun.

If you've been directed to this page by using /duty for the first time or are otherwise interested in becoming a greeter, you might want to check the new greeter FAQ.

The first time a player tries to go on duty they receive this warning and an automatic link to this page.

Any user of Yohoho! Puzzle Pirates is be permitted to use the /duty command to gain access to the greeter tools if they meet all of the following requirements:

The following conditions will result in a ban from greetership:

The first time an eligible greeter goes on /duty, the pirate will receive a warning (displayed here on the right) and automatically be directed to this page. It is important that a new greeter understands the responsibilities that come with the duty of being a greeter. Players are strongly encouraged to review the YPPedia information and general documentation on greetership and the game in general before /dutying on for the first time. Regular review of this information for updates is encouraged.

Greeters may hold special training voyages to help new players learn how to play the game. In order to set a ship to greeter pillage, the hold of the ship must be empty. Cannonballs and rum are not consumed during this pillage. Greeter pillages can only be run on ships with a maximum capacity of 15 pirates: currently, the longship is the largest ship available. Eligible greeters who are whisked to a greeter pillage are placed on duty as soon as they accept the offer to job.

When holding a greeter pillage, greeters should be prepared to be patient with green-named players who will be aboard, and will preferably have multiple greeters on-hand to deal with questions as they pop up.

Do not use greeter pillages (or the greeter status) to recruit people for a crew or flag. Specifically, this means that there should be no active recruiting on training pillages. However, if a greeter is approached by a greenie whilst on the training pillage and they ask to join the crew without any prompting whatsoever, then it would be acceptable for the greeter to recruit the greenie into the crew.

Greeter pillages should only be run for the benefit of greenies. If the pillage is not likely to benefit greenies then it may be better to configure a different voyage (such as a regular pillage) instead.

Greeter was a chat channel that allowed greeters to ask other greeters for help, such as finding someone who spoke a new player's language or getting help with a question the greeter didn't know the answer to. Release 2017-05-02 replaced greeter chat with global chat.

What greeters do not have to do

The effect of the "Talk to a greeter" button

The following trophies are related to greeters: