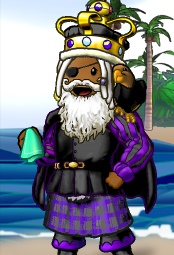 Kingpriam (also known as KP) currently stands as Captain of the Greeced Fists and is aligned with Folie Circulaire. While residing on all test and production oceans, he remains stationed on Midnight.

Kingpriam was created in the Fall of 2005. Within a month of joining Midnight, KP had joined the Rudder Lubbers of the Rudder Revolution, under the command of Dittemuzz. While the crew had once reigned over the Azure Ocean with a legendary fist, KP had been taken on in the twilight of the Rudder Revolution era. Shortly after, he was traded to the Soaring Gulls of the flag Silver Dawn. During this chapter of his piratehood, Kingpriam forged many long-lasting relationships with a wide breadth of hearties spanning numerous crews and flags. As time went on, however, he would learn that loyal participation comes with a cost. Blockades and heated political disputes would force him to choose between supporting his crew and flag against his most trusted and loyal mates. It didn't take long before the obvious finally took its toll: Kingpriam bowed out of the Soaring Gulls ranks and returned to the Rudder Lubbers.

Upon his return to the Rudder Revolution, nearly every crew hailing under the flag was virtually inactive. Even the veteran captain, Dittemuzz, had to take a leave-of-absence while tending to personal matters. Before her year-long retirement from Y!PP, she promoted Kingpriam to Captain of the Rudder Lubbers, but remained queen of the flag.

After a year of tending to the remaining embers of the Rudder Lubbers, Dittemuzz fell out of her brief retirement and regained her status as captain. By that time, though, KP was already leaning towards joining Springheel and his "L337" crew Unknown Pleasures, a far more active gang with a mentality that suited the raunchier echelon of pirate.

Politics and boredom manipulated Forbidden Pleasures' status within Blighted. During this stint of minor turmoil, Kingpriam decided to forge a crew from the elite ranks of the rumblers on Midnight. The Greeced Fists were born under the rule of Jamesdoom, the then-reigning king of Blighted.

Finally, in the Spring of 2007, Dchow, Springheel, and a number of other pirates split from Blighted to form a new flag. The name of the flag changed continuously. The Greeced Fists have remained under the flag-leadership of Dchow and Springheel, who now fly the flag of Folie Circulaire.

Kingpriam is most recognized for his arrrtistry, hosting the Treasure Hunters Guild, his passion for rumbling, zombie-hunting, and hosting numerous events and tournaments.