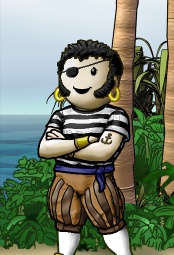 Jamesdoom began his career in December of 2004, after being washed ashore the docks of Cnossos Island. After spending a short amount of time in the crew Vampyromaniacs, he was recruited to join Templars. It was here he met his longtime friend, Ianthekorean.

Following some political shakeups involving Templars and their flag, Elysian Fields, Jamesdoom decided to forever turn his back on conventional politics and join Hell Fire For Hire, of the flag Notorious Fandango. It was with Hell Fire For Hire that he found his niche in the game: pillaging, blockades, and PvP.

In July of 2006, Jamesdoom realized Fandango was not where his heart was, and left to create a one-person crew, Empires Fall. Slowly but surely, pirates from various places began joining the crew, and before long Empires Fall had reached eminent fame. Realizing other crews in the ocean wanted something different out of the game, Jamesdoom founded the flag Blighted in August. After making Blighted one of the most successful flags on Midnight, he decided to become an independent pirate and experience life in various other crews and flags, between periods of being crewless. He is always willing to share what he knows about blockades and other game mechanics, especially to newer flags and crews.