The Case of the Comte de Froufrous

This story was released as part of the 2007 Halloween events.

A Reanimation Miscalculation: The Case of the Comte de Frousfrous 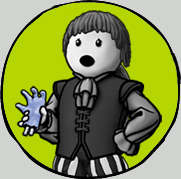 Friends! There is precious little time to explain, but a great danger is upon us! I'm afraid the archipelago is, well, teeming with the UNDEAD. A most unfortunate predicament, I know... how did it happen, you ask? Well, it would appear that this menace is the direct result of a bit of an alchemical "whoopsie" - an experiment botched by one of my formerly esteemed colleagues! Blast his foolishness! Our mentor, Professor Von Leberkas, would never have approved! But, allow me to explain how I came to discover this nefarious new peril...

My day began much like any other - taking my morning tea in the study while working on my latest treatise, "Troglodytes Intoxicatus: Scholarly Relflections Upon My Travels Among Rum-swilling Scoundrels". My work was interrupted, however, by the appearance of my valet, Cheeseworth, carrying a single note marked "urgent". I tore open the envelope and read the letter contained...

Me haVe GoT bIG pRoBleM. You SMaRT! BrInG TaStY BrAin FoR HelpInG mE wiTH bIg BIg prOBLeM! I wAIT fOr yER braIN at mY cHâtEAu! cOMe vERrrRRRy fASssssT wItH BRAINSSSsSSSsssSSsss...

The letter was written in a jittery, seemingly frantic scrawl - very much unlike the Comte's usual, deliberate letter forms. Nevertheless, I was determined to help a friend in need! I immediately called for my valet to ready the rowboat for a day trip. Unfortunately, Cheeseworth's trick elbow was acting up (an old fencing injury) and I was forced to row to the Comte's private island myself! My well-bred sinews being unaccustomed to such exertion, I did not arrive at the island until after nightfall.

The island was eerily quiet as I tied my boat to the moors of the dock. When I stepped out onto the beach I was greeted by an enormous black hound, who was perched upon the sand like some great shadowy gargoyle. He must be of the legendary ancient stock bred by the Comte's family for centuries - A magnificent beast! As I made my way up the winding path towards the château, the hound kept pace at my heels, at times only the gleam of his eyes visible in the darkness.

The front door hung by a single hinge, which creaked as gusts of wind blew torn bits of cloth and paper into my face. Fear nearly kept me from entering the château, but the black hound seemed to be leading me onward. Despite my growing dread of the place, my curiosity was piqued!

The Comte's laboratory was in shambles. Smashed erlenmeyer flasks, test tubes and all manner of beakers littered the floor. Bookshelves were torn from the walls, and candles flickered in dangerous puddles about my feet. On a table, among the rubble, the hound was nudging what appeared to be the remains of a journal with his snout. I recognized my colleague's written hand, but saw many symbols and diagrams that were befuddling, even to an accomplished man of letters such as myself! My eye darted to a tattered page headed, "A Practical Solution to the Skellie Menace: Fight Fire with Fire." Using my razor sharp intellect and herculean powers of deduction, I was able to extrapolate that the Comte had done the unthinkable! He had decided that the best way to clear the archipelago of those irksome sword-fighting skeletons was to unleash rumbling ZOMBIE HORDES to fight them! Entries from his journal explain what happened next...

Please, really, I just want to learn about the competition...

I have had it with these villainous skeletons flaunting their fencing skills and thinking we should be in awe! It is an outrage! Thanks to months of study I will at last be able to serve them their comeuppance! Soon the culmination of my genius will be at hand!

I finally have the "materials" needed to complete my triumph! My preliminary test subjects seem to be hungry for battle with the skeletons! Everything is going according to plan! They will sing my name in accolades for generations to come!

Oh, such a dreadful event has a occurred, I tremble even as I write this! This evening I was showing the products of my latest project to a dear acquaintance, Madame de Vache, after a few rousing songs on the harpsichord. She seemed less enthusiastic about my plan than I had thought she would be. In particular, she shied from my shambling servants and left early in the evening claiming that she was late for another engagement. Perhaps in my isolation I have misjudged the reaction of the masses to my triumph? No Matter! I shall go ahead with my plan and then they will see!

Later in the evening I was surprised when one of my new "friends" gave me a playful nibble on the foreleg as I dozed before the fire. I am sure he was only displaying his eagerness to be allowed to fight the skellie menace, but I told him he had to wait until everything was in order. Silly fellow...

I'm so sleepy, I really ought to have a nap.

I feel really funny. My new friends and I seem to have more in common than ever before. Funniest yet? Skellies not seem so bad anymore. Some came to say "hi". We all have a good laugh. I showed them how I got so many new friends and they said, "why not have more skellie friends too?" So We made many many more new friends...fleshy ones, bony ones, all kinds of onessss. We had lots of fun...but now I am so hungry. SoOOoooo hungry.....

It was then that the Comte's hound began to bay, stirring me from my reading. I saw then that the dog and I were no longer alone in the room. I...I cannot bear to recount what I - NO! I fled immediately back to the docks, joined by the helpful canine that had warned me just in time! I rowed as fast as my poor arms could away from that accursed place! As I rowed away, I thought I could discern on the beach a horrid shambling mass of creeping horror! I could hear, even as the island disappeared in the distance, the dry clatter of bones and the guttural croak of my former friend as he gurgled out over the sea after me the phrase, "cOMe bAcK fRiLLy! yOU HavE jUSSssSSSst gOt tooOOOoo mEEt My FRendSsssSS!"

So there you have it ye rogues and scoundrels of the high seas! This is the nature of the threat and I can only assume that the danger will continue to grow unless those of more mettle than I stand up to it! I have become aware of a growing fondness in my heart for the rum-swilling buccaneers of these islands. So brave! So...not afraid of swarming undead horrors! And how fortunate I would be to know such fondness is reciprocated in full! The joys of friendship are limitless, are they not? So please, dear friends, call upon your fellow savages - er - crewmates to save me.... save us... from the ZOMBIE HORDES and their newly expanded SKELETON COMPATRIOTS!

Oh, and please do alert me when the terror has ceased. A delicate intellect such as my own cannot be disturbed by barbaric scenes of battle and carnage. I shall be waiting out this unfortunate episode in my underground laboratory with my new guard dog watching the door, but I have heard that sea-g-g-g-ghosts have been appearing all over the archipelago and are guiding the brave to fight the tide of evil that threatens to overrun our beloved seas. So...um...GOOD LUCK with all THAT...