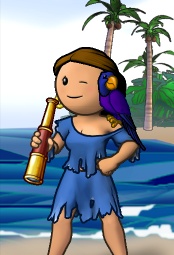 Yngvild is an island designer, senior officer of the crew Bad Sushi and lady of Valor on the Cerulean Ocean.

Yngvild grew up on the Midnight Ocean in the Infidels then Nidiata Dei Draghi, but moved to Cobalt Ocean when it opened. She was a princess of Something Powerful when they took Kirin Island and was once a temporary fill-in governor of Kirin. Her alt, Yng, is a former captain of the Valor war crew.

Yngvild is a fan of events and ran a Cobalt first anniversary event, plus helped Fredtheelf run a blockade event at Typhoon Island. She also immensely enjoyed the Ansel I blockade, which Valor lost to A Song For The Deaf, and the Kirin II blockade.

Yngvild is thrilled to report that she lost an eye at Ansel IV, helping Anonymity try to take it back. However, she was wearing a Halloween mask at the time and didn't find out until a week later when the mask dusted. Yng, the war alt, lost a leg and an eye at Kirin V.

Yngvild has been scarce on the Cobalt Ocean, but has been seen on Whirled and has joined a more active crew on the Malachite Ocean. She wrote up some of her history here.

She entered the island design realm through the Design the Oceans Contest.[1] Her excellent design work can be seen at the following islands:

This island for the Defiant team has a river flowing off a mountain. Yngvild started this before all the defiant ground tiles became available and she wishes she had spent more time on it later. She used to be charmed by the anole lizards when she lived in their climate.

Yngvild found many flickering rocks in Jezabella's version of this island and somehow ended up inheriting it from Jezabella. She fixed the flickering and added the finishing touches.

Yngvild originally tried to make this island look like the aurora borealis, but Nemo reigned her in and challenged her to make it look like sand in a hydrodynamic flow. She looked at the sand motion on the Jersey Shore, specifically Sandy Hook, to get ideas for this island.

This island was one of two that got Yngvild into the island design group. It was originally made up of the northern two-thirds of the island but was deemed too small just before these oceans opened, thus the southern portion was added later.

This island was designed when the cliff tiles were newly available and Yngvild was just learning how to use them. The goal was to make a mountain so tall the top is snow-covered.

After Malachite was opened, the island design team started work on a new ocean, code named "Butterfly". The first version of Dingwall was for an archipelago there with a British theme to the island names. Somehow the name stuck, even though the island needed a bit of work to bring it to Obsidian, including stripping off a huge amount of iron and stone.

This island was designed fairly quickly and easily for one its size (i.e. too large for the map window). Yngvild had hoped that the bogs would be possible to walk through, but pirates lack the hip-boots needed to get through there.

This island was one of two that got Yngvild into the island design group. It originally had a wooden dock which was taken out before it was used. This island needed a lot of fixing up between the contest and when it was ready to actually be used. this is when Yngvild improved her skills with the ground tiles.

Yngvild likes rocks and snow, so enjoyed working on this outpost.

The challenge here was to make rocky spires out of the limited number of objects. More rocky fun!

The southern part of this island is supposed to have rolling hills.

Yngvild got in the mood for fractal coastlines again on this island.

More fractal coastlines! The name came from a lunch table discussion about larval pollock possibly taking refuge under the melanasters.

Yngvild went overboard on this volcano and originally made it even bigger.

The first plan for this island was based on a photo of a raven, such that the whole island was a silhouette of a bird flying towards you. It was deemed too boring on the ground, plus too small and easy to wreck when colonized. Yngvild asked for help in the redo when she ran out of time and KingOfCards was kind enough to put some effort into it.

This was another fun little rocky outpost. Yngvild loves dyeing with indigo and was happy to put some by the pond.

This island is rocky and covered in jungle, lots of fun to do. It too was deemed too small and needed some beefing up before Hunter opened.

The Obsidian plans included bringing islands from prior oceans in, with just a bit of an overhaul on each. This island needed to be converted to the Defiant look.

Yngvild was excited to get to play with some of the usually off-limits features such as fort walls and town pavement on this one. She was also amazed when it became the default home for everyone back when Malachite was new.

A one-hour outpost made at the last minute before Sage opened.

Yngvild originally made this island wider, making it too big for the map window. Can you find all the beach trails?

Yngvild enjoyed making the garden on this little island.

This island was really challenging for Yngvild, who tried to get realistic bulk in the volcanic cones.

More fractal fun with the coastline.

This island went relatively quickly for such a large one. It was rushed by the Sage deadline, though Yngvild thinks it went well in spite of that. This is where Yngvild finally learned more about mixing rocks in with the cliff tiles, getting it less boxy than Fintan's cliffs.

Yngvild enjoyed working on this island, beginning it on a vacation and getting mountain ridge ideas from flying over the islands off British Columbia. It was originally wider, with a bigger wooden dock, but Nemo became stricter about not allowing islands that are too large for the map view and forced a redesign.

More recently, Yngvild has been able to design one of the Cursed Isles and several atolls.

After working to add more (much more) jungle to the Cursed Isles, Yngvild came up with a jungle sock design for a contest hosted by Knitter's Magazine. The yarns used were all dyed using natural dyes, including indigo, logwood, cochineal, madder, coreopsis, tansy, and marigold. Though the socks didn't win in the dyed yarn category, they were be published in a book: Think Outside the Sox.