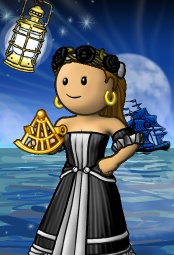 Jezabella washed up on the shore of Cnossos Island, in the Diamond Archipelago of the Midnight Ocean, on Easter weekend 2004. Her first piratey experience was a 48 hour war frigate pillage with the (now no longer active) crew Crimson Tyrants and she was recruited to the crew by Stevedave on the self same pillage. Quick to find her sea-legs Jezabella rose rapidly through the ranks to become a senior officer in a relatively short time and was known to lead many a pillage to recruit new mates to the crew. Jezabella also showed interest in the economic side of the pirate life and became a manager at all crew owned business operations.

Almost a year later after a stint as captain of the crew and increasing feelings of dissatisfaction Jezabella left the Crimson Tyrants to join the recently formed Fandango Familiars of the flag Notorious Fandango where she held the position of senior officer. After a year spent with the 'dangos' Jezabella moved within the flag to war crew Hell Fire for Hire where she held the position of a senior officer.

Seeking to make new friends and find new fun Jezabella left Notorious Fandango to go on a crew hopping holiday. She is currently a senior officer with crew The Phoenix Warriors of the flag Tyr's Own and shows little sign of moving on. After a lengthy period of inactivity Jezabella has recently become active in the game once again and is quickly developing a trinket collecting addiction.

All four of these shoppes were located on Cnossos Island in the Midnight Ocean.

An active fan of blockades with little experience when she first joined Notorious Fandango, Jezabella threw herself into blockade activity. A pioneer of the quick float method Jezabella soon became involved with blockade logistical management including floats, stocking, and ship coordination during the actual blockade.

At Gaea V Jezabella performed the role of Admiral seeing Notorious Fandango through to a 3/0 victory against then island owners Heavens Aligned. Truth be told however Heavens Aligned were caught unawares as they had sailed off to the recently opened island of Lagniappe where they lost 1/3 to the other contender Dark Judgement. Therefore the defense at Gaea was almost non existent.

Jezabella was also present at the famous Xi II blockade where a round went into sudden death for the first time ever.

Jezabella has navigated war brigs in several blockades although her track record is not strong. She is also an experienced 'XO', a term adopted by Notorious Fandango to describe the role of running a ship during a blockade in tandem with the navigator.

Jezabella is also one of the winners of the Design the Oceans Contest.[1] Her excellent design work can be seen at the following islands: