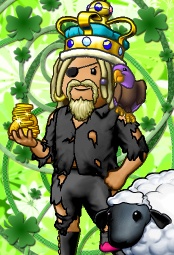 Joshuawhelan is a pirate who is based mainly on the Viridian Ocean. He is currently captain of the crew Nirvana and king of the flag Look At Me - I'm God.

Joshuawhelan started Puzzle Pirates on the 4th July 2006. He quickly learned the ropes, and created his first crew, Pirates O' Viridian, on the 7th August 2006. He remained with this crew for over a month, but didn't know many people at the time and struggled to get it past 30 members. This resulted in him passing the crew onto a friend, and moving on to learn more of the game.

Shortly after, Joshuawhelan was approached by Katsdragon, who offered Joshuawhelan the position of senior officer in her crew. Joshuawhelan quickly took up this offer, and got settled with her crew; The Dreadful Sea Dragons. In this crew he made many friends, and learnt much of the game from Katsdragon. After awhile there, Joshuawhelan felt it was time to depart with his new-made friends in hunt of greater things, leading him to create a flag with his friend, Wronged.

In January of 2007, Wronged and Joshuawhelan founded the flag; Ocean Gale, which still exists to this day, but is however dormant. This flag got off to a great start, gaining over 300 members within a week. Within two weeks, the flag reached #20 on Viridian, showing great potential for the flag and for Joshuawhelan. However, by the end of January, Joshuawhelan had to take a long break from Puzzle Pirates due to unforeseen events.

Joshuawhelan returned to Puzzle Pirates in January 2008, and soon got back to pillaging and trying to achieve higher goals. Joshuawhelan got with one of his old friends, Bomberace, and spent much the first half of 2008 pillaging and making more friends. Doing this, Joshuawhelan met Jessieanne and Capwaring, and the four of them formed a new crew; Organized Chaos.

During the time in Organized Chaos, the four founders often switched the role of captain between them, and built the crew very well. By August 2008, the crew reached over 200 members, and was #10 on the Viridian Ocean. However, Joshuawhelan, Jessieanne, Bomberace and Capwaring soon fell out over some other issues, and all departed and went separate ways, disbanding the crew, leading to the next chapter of Joshuawhelan's pirate life.

By December of 2009, Joshuawhelan rejoined a crew he had previously founded almost a year earlier called Impact. He retook the captaincy and quickly started to rebuild it. This was when he met Wooden, and soon joined his flag. However, at this point Wooden's flag didn't last long, and soon disbanded. Joshuawhelan instead went to join Moedefoe's flag; Look At Me - I'm God, and became Prince of the flag. Joshuawhelan was here for awhile, and continued his normal pirate life of pillaging and playing poker. However, after Moedefoe quit in March of 2009, Joshuawhelan left the flag for South of Sanity, where he rejoined Wooden. However, this time he joined Wooden's crew; Legendary Warlords.

While in Legendary Warlords, Joshuawhelan spent most of the time playing poker and helping out the flag South of Sanity. Unfortunately, Wooden decided to merge his crew into another crew, displeasing many of the crew members. This led to Joshuawhelan bringing a third coming of his crew Impact, and rejoined South of Sanity. Joshuawhelan quickly received royalty for his work, and helped in the build up to the flag's first blockade. However, Joshuawhelan left Puzzle Pirates during the period of the blockade.

In 2010, Joshuawhelan returned to the game. He quickly rejoined South of Sanity, renaming his crew, Impact, to its current name, Nirvana. Joshuawhelan is now the king of Look At Me - I'm God and governs Moab Island.