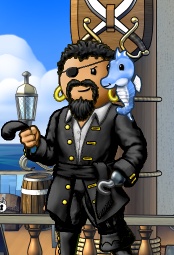 Voidrix is a pirate on the Cerulean Ocean. He is the current captain of the crew Unquenchable Fury and prince of the flag Babylon. He is also the founding king of the now disbanded flags Painstricken and Audaciter Proeliator, and former prince of the flags Dies Irae and Universe A.

Voidrix also plays under the alias Venedar-West on the Cerulean Ocean and is the captain of Unquenchable Fury-West and a prince in the flag We Won't Back Down.

Voidrix joined Puzzle Pirates early in 2007, and he received his officer training in The Legends (of the flag Crimson Tide) by senior officer Fortytwo. On Friday, July 13, Voidrix left his former crew and created a new crew under his rule named Unquenchable Fury, and the flag Painstricken.

In August 2007, Voidrix disbanded his crew and flag after having little to no support in building it into what he had intended. He contacted Crankydebbie of Seas De Resistance, which were at the time flying the flag of Dies Irae. After about a month of being in Seas De Resistance the crew flew a new flag, Rums Runners, under the monarchy of Rumsbloke. After being in the flag a week he obtained titled membership, becoming a spokesman for his crew.

Voidrix eventually joined the crew Chaos Theory in the flag Dies Irae as senior officer. Once the crew started dying down, Voidrix took it upon himself to reform his original crew Unquenchable Fury with trusted senior officers Sailmaker and Seemonkey. In a short period of time they grew enough fame to make a flag which they named Audaciter Proeliator meaning Fearless Warriors in English.

As of early June 2008, Voidrix moved his crew back into Dies Irae, and took prince status within the flag. However after several years of residing in the flag participating in blockades, events and general running of the flag, its population began to dwindle much like the ocean. After much thought he moved over to the flag Universe A as a prince and starting developing blockade plans with a much more active flag in August 2012. Once Universe A completed it's goals, Voidrix took a hiatus from which he returned for the release of the obsidian ocean in mid 2017. It was at this time he moved his crew into Babylon where much of his previous flag members had congregated. Shortly after joining the flag, he became a royal and is involved in making sure blockades are still a thing on the near dead ocean.

Through all of this, he still continues to work on achieving ultimate of ultimates, where ultimate crafter is the last area needed with Distilling, Shipwrightery, Alchemistry and Blacksmithing required to get there.