Azarbad the Great trims his beard in a four pointed star shape, vaguely reminding of tongues of fire, and dresses in a sumptuous middle-eastern outfit, wearing a unique turban adorned with a stone.

The flame theme is by far the most recurring in Azarbad's characterization along with his middle-eastern guise, while hauteur and opulence are secondary traits of his character.

Both his ships and swabbies are named with firee-themed or imperious adjectives. 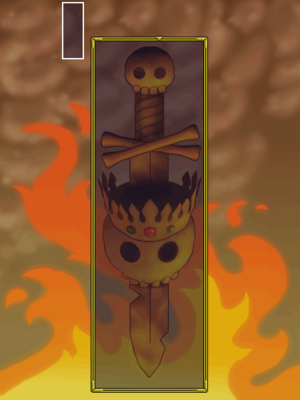 Unlike most brigand kings, Azarbad the Great can only be fought in a swordfight.

In the fray against his crew, the usual swordfighting background is replaced by a special one.

In ransom for his release, Azarbad can give to the victorious player four different kind of trinkets: exotic confections, jeweled daggers, ornate earrings and a blazing stone known as the Heart of Fire.

Azarbad the Great's flotilla is non-sinking and it can be recognized from an icon depicting the Heart of Fire.

If his flotilla is not defeated in time, Azarbad can declare a blockade on a nearby island. Like for any other Brigand King, said blockades are always sinking.

Although in his flotillas Azarbad mostly gathers Arab ships such as dhows, baghlahs and xebecs, it is not unusual for him to deploy war brigs and war frigates as well.

The naming scheme of his ships follows the one of his swabbies.

When the All-Consuming Flame succeeds in taking over an island, Azarbad install himself as a governor, setting up the taxes at 100% and posting the following news.

The Season the Flame

On June 17, 2008 Bia announced that she had received a missive from Azarbad, in which the Brigand King stated that he was willing to provide guidance to pirates in order to beat off Brynhild Skullsplitter and prevent her from colonizing new islands. He so organized an event blockade, the winners of which would have been rewarded with "blockade packages", consisting in ships, stock and money covering war chests for blockading outposts, medium and big islands. The rules for the event blockades were: Non-sinking, Alliances Ignored, Use Maneuvers, One Round, Normal Obstacles, Ships Allowed: Dhow, Baghlah, Xebec.

All the blockades happened on June 27 and they were held on the following islands:

Azarbad the Great made his appearance on the oceans following the release 2007-05-24.