An alliance is a formal political agreement between two flags.

Alliances are usually formed for one or several reasons, including:

Alliance webs can become very complex. Declarations of war are often difficult as war cannot be declared if the two flags have a common ally three levels out. This often leads to temporary dissolution of alliances to declare wars. 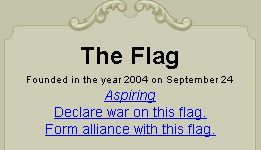 Royalty can form an alliance, or declare war, on another flag's info page.

If a royal in Flag B were to propose an alliance in return, it would then go to a formal vote among Flag B's royalty, and the motion will be one of the following options:

Once an alliance is approved, it is listed on both flags' info pages on the left-hand side.

Sending out alliance offers without first consulting with at least one of the royalty of the flag being proposing to is generally considered bad etiquette.