For the regular movement, grapple and fire tokens used in all sea battles, see Sea battle#tokens.

Maneuvers are earned by duty puzzlers aboard a ship on a blockade, flotilla, or sea monster hunt board. These pirates play variations of the regular duty puzzles, Carpentry, Bilging, Sailing, Patching and Rigging, which have additional symbols added to the regular puzzle pieces when performance is good, and the player's experience is at least Apprentice. The players can, with some effort and in a manner depending on the puzzle, combine these symbols to contribute effort towards earning these special tokens for the ship, which is shown on a small meter. Once all three duty puzzle meters are full, the maneuver is earned for use in the battle. These tokens are shown on the battle navigation screen in addition to the regular movement, grapple and fire tokens. They can be used by the ship's navigator to execute special moves. 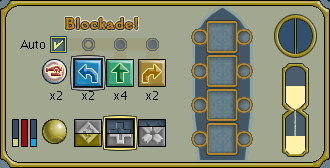 Progress towards the completion of tokens is shown in three ways. The navigating tokens on the helm are filled in as progress is made towards them. The person at the helm can click on one to indicate that they'd like players to work towards that specific one. This displays an image of that token and a three-fold progress meter inside the right edge of the duty puzzle on the players' screens. The progress meter has three vertical bars, from left to right: a yellow bar for sailing, a red bar for carpentry, and a blue bar for bilging. The puzzler sees the bar for their puzzle as wide, and for the other puzzles as narrow. The bars fill up as symbols are completed in the corresponding puzzles. When all three bars reach the top the token is awarded, or the gold upgrade if the silver one was already earned. A copy of this meter is also displayed with the helm controls, it displays the progress towards whichever token is currently under the mouse cursor.

The contributions made by each pirate towards token generation are shown on the duty report after each segment. One small yellow symbol is displayed for each symbol completed by that pirate at that station in the last segment.(verify) (switching boats might reset it, leaving and re-entering board doesn't)

The following trophies are related to maneuvers: