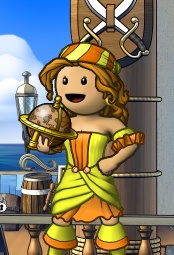 Sunny is currently a senior officer of The Cartographers, and has held many positions of distinction throughout her time as a pirate.

The pirate now known as Sunny began as Sunnyred on the Azure Ocean, starting out in the crew The Titanic Mu-Mu Pirates, who later became The Thunderous Mu-Mu Pirates. In September 2003, the crew merged with the Cartographers, where she has remained ever since. After the crew moved to Midnight and became part of Silver Dawn, Sunny was bestowed with the crew's royalty seat. She held this position for five months until turning it over to Pleiade. Later that year, she began a long tenure as captain of her crew, when previous captain Choto relinquished the position.

During her time as captain, Sunny met her future in-game husband, Muffynz, who at that time was in another of Silver Dawn's crews, Neverland. Muffynz proposed marriage, and the two were wedded in a ceremony performed by Redrumjack in the main hall of Dawn of a New Eta. Shortly thereafter, she was appointed as the new lead event planner for Silver Dawn, and orchestrated many a fine event, including the flag's second anniversary celebration. Also, she once again took the position of royalty representative, holding it for a four-month term until Muffynz (who had since joined the crew) was chosen as her successor. At the end of the year, Sunny campained for the monarchy, and was elected to the position by a majority of the flag. At this time, she decided to hand over the captain's hat to her first mate, Crazyluigi. After serving her term as queen, she has gone into semi-retirement, but remains an integral part of her flag and crew to this day.

After 92 sinkings, Sunny finally got her first injury (an eyepatch) during the action of Eta VII.