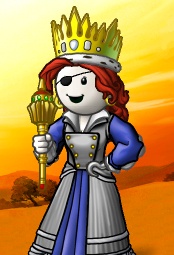 Deirdremac was a senior officer of Soaring Gulls and lady of Silver Dawn.

Deirdremac, better known as Dmac joined Ye Hardy Mates in the summer of 2004. She rapidly ascended the ranks of the crew to Senior Officer and became the first person in the crew to memorize all the live points in the Midnight Ocean. Within the crew's flag, Silver Dawn she became an assistant quartermaster under Feegle in the spring of 2005, during the Scallywag War. She has continued activity in the flag and her gift for mediation, friendliness and outgoing personality won her the position of queen of Silver Dawn in June 2006. She was selected to a second term as monarch of Silver Dawn in September 2006, making her the first ever monarch to hold office twice.

In November of 2006 she left Ye Hardy Mates to join the Soaring Gulls, as her former crew had decided to leave the Silver Dawn to find their own way in the ocean.

Real life issues took Dmac away from the game early in 2007, but she rejoined her flag and crew in late June 2007 with a renewed interest and vigor for the game. Tragically, the real-life person behind Deirdremac was involved in an auto accident on July 11th, 2007 and passed away due to her injuries (1960-2007). The news of her passing shocked her flagmates, crewmates and friends around the ocean, and many offered their condolences and prayers for Dmac's real-life family in the YPP Main Forums. [1]

During her tenure in game she led Silver Dawn through one of its most expansive, yet tumultuous times. A large number of new crews were admitted to the flag through a merger with Heartless Shadows. And yet, she presided over some very controversial issues with complete professionalism, grace and an unequaled sense of fairness.

Deirdremac was a free-spirited native of Texas in the real world who displayed a love for life and people that is rare in today's world. While she loved YPP and the online piracy, she was also an active member of the Renaissance Faire community in the Dallas/Forth Worth area. She displayed the ability to interact with a wide variety of people from all stations and walks of life. She is survived by her real-life husband Whiplashjack and Blackunicorn in game.

On July 15, 2007 a memorial sail event blockade was scheduled at Cleopatra's Pearls. Mates from crews all over Midnight Ocean gathered for a 100-gun salute and silent war frig pillage to Zeta in rembrance of their fallen comrade. Approximately 1/8 of all pirates on the ocean at that time were in the memorial blockade.

Deidremac in front of the Silver Dawn Flag

Shot from the memorial event blockade at Cleo
Retrieved from "https://yppedia.puzzlepirates.com/index.php?title=Deirdremac&oldid=775225"
Category: