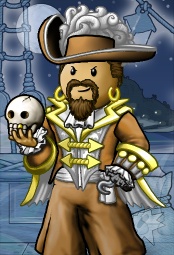 Daedalus is captain of The Cartographers (the sixth pirate to be so honored) and a former monarch of the once-eminent flag Silver Dawn. Currently, he is a proud member and Prince of the flag Crimson Tide.

If you'd like to make contact with Daedalus, the best place to find him is at the helm of the crew's long-running Monday night pillages, which set sail at 5PM pirate time on the Midnight ocean.

He primarily sails the Midnight Ocean but has clones on Ice and Cobalt. Pirates on dubloon oceans with this name are most likely not the same player.

Significant game milestones for this pirate: