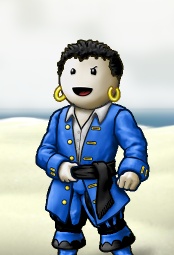 Spiritual is a fleet officer of -Frozen- and member of the flag Access Denied on Hunter. He was formerly a prince of Sins of the Flesh and senior officer of Twisted Glory.

Spiritual was formerly known as Menerack, an ex-fleet officer of Star Oceans Apart on the Viridian Ocean. He is retired from Viridian and currently plays on Hunter.

The beginning, on the waters of Viridian

Spiritual began his career on the waters of the Viridian Ocean around March-May 2006. Starting out as a greenie, he quickly learned the ways of the ocean and gained a name for himself. The first crew he joined was Star Oceans Apart, which at the time was under the captainship of Scabard. After being in the crew less then a month, he had already met the requirements to become an officer and was soon promoted. Spiritual started to sail his own ship as he had quickly learned the ways from the other great officers in the crew and become a great battle navigator. Soon afterwards he was promoted to fleet officer, proving his loyalty and his desire to do more for the crew.

He had asked the monarch of his flag -'Star Explorers'-, Twiggy, if he could possibly do more to help, and also if Twiggy would help him learn more about the ocean. He had received personal training on handling the crewmen on deck, getting them to their stations, and being an executive officer (XO) in his first blockade.

Spiritual was also part of the group called the "Mantastic 4", part of a fun, superpirate circle of friends, consisting of the 4 pirates: himself, Twiggy, Exhaustra, and Moz.

A few months later he was expelled from Star Oceans Apart by the king and senior officer Twiggy for reasons not to be mentioned.

After the fall and being shunned by his old crew and friends, he changed his name to Spiritual and moved to the Hunter Ocean.

A new beginning, on the waters of Hunter

Spiritual began his pirate career over again. Starting out in only rags, he soon met a friend who would turn into his best, Drayke. He had told Drayke his tales from Viridian and Drayke welcomed him with open arms. He soon joined the crew Drayke was in, Transition, under the captainship of Gunnermooch.

After a while he started discussing with Drayke his plans to become a captain. Drayke said he would join Spiritual in his crew as a senior officer, helping him out and being a friend. A few days later Drayke himself had left the crew Transition for personal reasons and made his own crew, Poseiden's Fury.

Spiritual was contacted by his former captain from the Viridian Ocean, Scabard, who gave him his first ship on Hunter, a war brig, and the rank of captain of the crew Shadows of Destiny to help start his pirate life over again. Spiritual then contacted his friend Drayke and asked him if he wanted to join, not knowing Drayke was already a captain. He declined, and explained the situation and why he declined to join, but he always offered a hand to Spiritual when needed and introduced him to his new girlfriend.

Soon afterwards he started taking out the ship, and recruiting more members to his crew. He was asked by several to join their flag, and he chose to be in a flag called Treasure Hunters which is now known as Bad Realm under the monarch Pegleg. Being pressured to be with his best friend Drayke, he soon left the flag, and joined him in the flag Vicious under the monarch Jacktheblack. Spiritual started slowly building his crew to be one of the best on the Hunter Ocean and helping raise the flag Vicious to be one of the most well known.

During that time Spiritual was asked to be Drayke's best man at his marriage to his fiancee Fallin. He graciously accepted and of course was also fashionably late showing up to the wedding. Jacktheblack ran the ceremony and pronounced them man and wife. Later Spiritual, Drayke and Fallin disappeared, leaving their crews without captains, which soon started falling apart.

Months later, they Spiritual, Drayke and Fallin washed back ashore together. Realizing their flag was falling apart, they merged what was left of the two crews, and joined the flag Fae's Rebellion, which is now known as Havoc. Afterwards, they started building the crew to be one of the best. Gaining fame and glory, they decided to rename the crew to Twisted Glory.

After a few months, former Fae's Rebellion members Megami and Tentei decided to make their own flag, Sins of the Flesh. Spiritual and Drayke followed them. Spiritual became a senior officer of Twisted Glory and prince of that flag before leaving to become fleet officer of -Frozen-.

Spiritual is a ex-roommate in Drayke's townhouse on Quetzal Island where he also used to manages a Shipbuilding stall. He owns 4 cats, 2 dogs, and a rat.

He can usually be found either playing poker, spades or swordfighting.

Spiritual has navigated or admiraled in the following blockades: