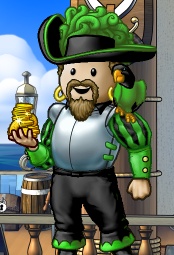 Jacktheblack has been banned for reasons not to be discussed by Three Rings Design, creating temporary chaos in the political world of Hunter.

Jacktheblack was the monarch of Vicious and senior officer of Crimson Seablades on Hunter.

He is a retired Shanty Jockey for Shanty Raid-io on the Midnight Ocean.

Jacktheblack has been the governor of Jorvik Island, Eta Island, Cnossos Island on Midnight and Terra Island and Prolix Purlieu on Viridian.

He is currently retired from Midnight and plays exclusively on Hunter.

Jacktheblack began playing the game way back in February 2004 when it was recommended to him by another editor on his college newspaper. He played for a bit and got hooked on the game right away and subscribed within a few days. Jack started off in a crew called Azure Rebellion under the flag Maritime Law. During the 3-4 months he was there, Jack ran a 24 hour grand frigate pillage and "had a blast." He grew bored with the flag due to the fact that he enjoyed blockades and his current flag was only looking at helping other flags take islands and not make a move of its own.

He then created his own crew called Maritime Marines, and stayed under the flag for a little while, hoping to be able to change the policy of the flag as a captain. That did not pan out, so the crew left the flag and changed its name to the Atha'an Miere, from the Robert Jordan's Wheel of Time Series, meaning Sea People. He created a flag called The Forsaken for a short amount of time, but since he wasn't well known yet it didn't get off the ground.

Soon after Jacktheblack created the flag he had a chance to go to San Francisco and meet many of the people who play the game at the Ringers party. It was there that he met many people who have since become friends. One person Jacktheblack met was Homullus, who impressed him when he talked to him about his experiences of the game and some of his plans.

A week or so after Jacktheblack got back, he talked to Homullus in game about having his crew, Atha'an Miere, join Homullus' flag, Midnight Armada. Since the crew was rather large at the time, Jack was about to get a royalty position for himself and was for the first time really getting into the political aspects of the game. He helped the flag in many ways, including with blockade preparation. He had naved in several blockades previous to joining the flag, but this was the first time Jack had ever worked on getting items ready to take an island and colonize it. He found he rather enjoyed it and began to look for other ways to do more of it.

On his search for more blockade experience Jack ran across Robertdonald before the Turtle II blockade. He was standing around the docks looking for navigators and Jacktheblack offered to help him out. They worked well together and soon became close friends.

Soon afterwards Midnight Armada took the island of Park during which Jack got his first admiral experience in a blockade. Soon he began to have conflict with the other royalty over how the island should be laid out as well as his friendship with Robertdonald. Due to a conflict with a separate Midnight Armada royal, Robertdonald blockaded Winter Solstice and Park Island. Jacktheblack stayed with Midnight Armada and admiraled both blockades against Robertdonald, yet the royalty was still at odds with him. Jacktheblack felt that his crew should stay with Midnight Armada because they were still owed a distillery on Park Island, but he left the flag due to his many differences with the other royalty. With that, Jacktheblack handed over the captain's hat, and made his way to Mercenary Squadron and Scallywag Syndicate.