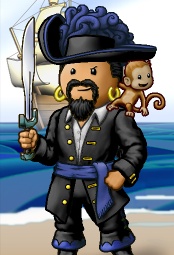 Drayke started off on the Midnight Ocean. At the time he had the money to purchase a subscription and didn't know about doubloon oceans or paying for a subscription with doubloons. He quickly learned the ropes after joining the first crew he saw on the docks... Infernal Infidels, who at the time governed Park Island. Eventually money ran out, but the want to play and get better did not. Drayke's curiosity was peaked for Battle Navigation when he saw a pirate by the name of Ninjaguy, who changed the way Drayke played forever. Ninjaguy was so confident about his abilities he wore nothing but pink, all his ships (including a custom renamed grand frigate) were painted pink, and soon after Drayke challenged him to a Swordfight for the first time, he found out why (he knocked Drayke out within like 15 seconds). The change in the way Drayke saw the game came when Ninjaguy effortlessly battle navigated a grand frig at sea. Drayke was astounded to say the least, and from then on vowed to be able to do the same thing.

Drayke's money ran out soon after, so he had to make a new home on the Viridian Ocean, where he met a female captain. Being the patient captain that she was, they worked together to develop his bnav skills. She was astounded by how well Drakye ran a sloop, and confused at why he couldn't battle navigate a war brig. To this day he still wonders the same thing himself. She taught him the Black Widow technique, which is where he got the name for his infamous war frigate. If pirates ever pillage with him, they should pay attention once he gets started on it and they'll probably pick up on it a bit.

After he was done with that ocean, he picked up and left for the Sage Ocean, which is where he met Luigi and Aatank, the peculiar pair. This is probably the shortest visit he ever had to an ocean, the whole thing was booched with blockades and people trying to stab others in the back. He heard at the time it was the same way with the Cobalt Ocean. He came back to Midnight, his home, and stayed there for quite some time. Until a new ocean opened up - the Hunter Ocean.

Once Drayke took his first look at Hunter, he thought to himself this would be a great place to start, he could hop on the bandwagon as an elite in a new ocean, since he was at this point considered fairly elite. He joined a crew shortly after arriving, but this time not the first crew he saw. He played around a bit with jobbing for other crews, and once he saw a pirate by the name of Gunnermooch bnavving like he did, he was hooked. He made it very clear what his intentions were with the crew. He wanted officership as soon as his stats would allow, and was planning on purchasing a sloop to start his own crew as well. To his surprise, he was given a promotion to officer shortly thereafter and given a sloop.

This was his big break, the way he would start his new life on Hunter. He had the knowledge, he knew the puzzles all too well, and he had a HUGE amount of experience behind him. Not only in the puzzles that you are ranked with, but the social puzzle as well as the captainship puzzle, though never having been a captain himself before he made Poseiden's Fury, his own crew. The name was decided upon by Drayke, but heavily influenced by the unnamed captain on Viridian. He had the understanding of how a crew should be run, and what motivated people to do better at puzzles.

Once he was placed as officer in the crew, he was out pillaging EVERY day, sometimes all day long, and he quickly made a name for himself as one of the best bnavvers in the ocean. Then it happened. He ran into someone that he hadn't seen since he was on Midnight, where he would only see her walk from the docks to her shops. On Midnight, she'd seemed unreachable, like she was somehow on a higher plane of existence than Drayke, as he was a greenie and she was royalty. Yet here she was, in the same crew as him, and looking up to him as a battle navigator. No longer was he just another greenie in her eyes, he was something, and that made him all the more dangerous to those treacherous bots, because he was more driven than ever before, and that ambition's name was Fallin.

There was only one problem, once they talked and found out how they felt about each other, (yes, she felt the same way) he found out that someone named Foreverlost was her current main squeeze, but had not been online for quite some time. So they agreed to tell him once he got online and continue with their everyday routines. Shortly thereafter there was a falling out within the crew. Fallin and Drayke decided to make their own crew called Poseiden's Fury, and it was semi-successful in retrospect. But then again Drayke was just getting started, he didn't really pay too close attention to who got promoted to what. Nor did he care all that much about fame, though it did rise, and rise quickly.

Fairly often Drayke would come across someone that would peak his interests as a pirate with potential, one of these became his first mate, Spiritual. From the time Drayke met him, there was a way about him, the tone in which he seemed to speak his written words, the comedic undertones that lined his seemingly silken tongue. Drayke was intrigued by him, and didn't know why. He later came to find out that he was incredibly close to being his twin (as far as things they have in common), and so Spiritual continued the legacy of Poseiden's Fury with Drayke and Fallin.

There came a time when Drayke was to be bored with YPP though, and it came at a time when he was the most financially strapped in real life. So he had to take a leave of absence from the internet altogether.

When he returned, he was greeted warmly by only one person, Fallin, of the 15 left in a washed up crew. Spiritual came on a bit after the first day of repairing the damages that Drayke's leaving the game left in its wake. He came to find out Spiritual had been out of the game too. They played a bit on YPP, and some other games, then finally decided that they would make that aforementioned comeback. It all started with the only thing they had left in the crew of monetary value, Shanghais. They took two of them, and renamed the first ship Drayke was given on Hunter, the gift from Gunnermooch, and changed its name to what it is known as today, the "Elite Pillager". Then they used another two Shanghais to rename the crew, from Poseiden's Fury to Twisted Glory, to signify what they strive for, and to signify the merging of what was left of Spiritual's crew with what was left of Drayke's crew.

After they had amassed a great deal of crewmates, they had reached number 3 on the ocean wide crew fame list. They did it with half of the numbers that the people we passed had in their crews. But as with most good runs, it eventually comes to an end, and that end was when he took on a new job after moving again. He had so many hours and was still playing another game as well. He lost a lot of crew, and dropped down to the crew fame position labeled #26.

Now Drayke is back and living it up in the good old Hunter ocean.