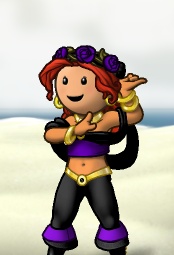 Megami started her YPP life under a different name on Midnight Ocean and then moved to Sage Ocean when it first opened. It was there that she met Tentei, the love of her life (both in game and in the real world). They moved to Hunter together under their current player names on November 18th, 2006. Tentei and Megami take their names from the Japanese translations for God and Goddess.

Since then, Megami has been quite successful. Meg, as she is better known by friends, is the co-captain of the crew Pleasureful Sins, and co-monarch of Sins of the Flesh. Since moving to Hunter, she has made many good friends, and is the object of affection to many. Her flag, despite being only about a month old, placed third in the Hunter 24-hour blockade event on January 13th, 2007, choosing to open Doyle Island as their prize.