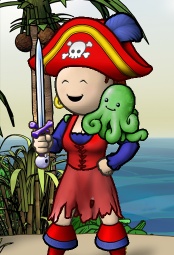 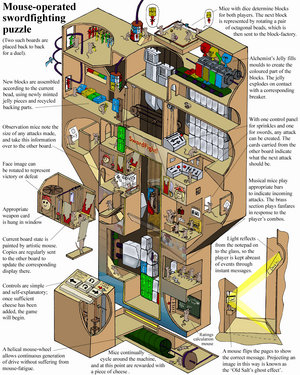 Rubyspoon started playing Puzzle Pirates in August 2003, and soon encouraged Oneiropoios to do the same. She joined the Buck Privateers, then later followed those that were forming the splinter crew Velvet Claws, which later joined the flag Crimson Tide. Several years and experimental alts later, she ended up in British Sea Power, the crew that Oneiropoios had joined right at the start of the whole adventure.

Now that her beta tester subscription has run out, she can most often be found on the Viridian Ocean in the crew Odin's Demise, rumbling, playing poker, or most likely of all, Distilling.

In Puzzle Pirates folklore, Rubyspoon's most notable role was as a prosecutor (along with Ninjaguy) in the trial of Artemis, a position earned by posting logical proof that Artemis must be a witch on the forums. Curiously, half of the defence team was none other than her friend and rival, Oneiropoios. Rubyspoon maintains that it was thanks to her prosecution and Nemo's subsequent attempted burning of Artemis that Magog was driven from her, and Artemis appears to bear her no ill will.

Rubyspoon played a key part in the development of the female captain's hat when she reminded Nemo that it needed a skull and crossbones, and since the change was implemented has worn such a hat almost exclusively.

As one of the players that crosses the line of gender between player and avatar, Rubyspoon took a poll on the forums to get an idea of just how many were in the same position, which yielded some surprising results.

Rubyspoon is an enormous fan of the Distilling puzzle and has posted some distilling music videos.

Rubyspoon first won a familiar - a white Octopus named 'Doctor' - as her alt, Solanna, for being on the winning team of the inaugural Olympic Champions League Team Drinking with team Briterati (along with Crystalclaws, Oneiropoios and Shuranthae) in February 2004. The octopus was then passed on to Alesru when the evil team 'OCTO' won the Team Drinking at the following OCL in May. In June 2006 the familiar policy changed, and as a result Doctor was returned to Solanna once more in a more permanent form.

Rubyspoon was a member of the team British Sea Power when they came third in Lejerque's Race for the Ruined Ring in August 2004, and so won part-ownership of a purple/navy parrot named 'Curação'.

She finally won a familiar all of her own, a green octopus, in the Slice of a Pirate Life contest of August 2005.

She then won a monkey familiar in the Carpentry Bake-off of September 2005 on the Cobalt Ocean, making her one of the few pirates (along with Pokey and Silversnap) to have won familiars for both a forum event and an in-game contest. She later swapped this monkey for Escape's parrot.

Shortly after giving away the parrot, history repeated itself as Rubyspoon won another pair of familiars for both a forum-based and game-based event: she won an octopus on the Viridian Ocean in the Pillaging Picassos competition ("Photoshopped" category), followed by an octopus on the Cobalt Ocean in the first ever Distilling Bake-off.

Just a few months after they started playing, Rubyspoon and Oneiropoios ran a combination "Drinkin' and fightin'" tournament on the Azure Ocean, and later (with the introduction of brawling) a more advanced version of the same event, "Rum Punch" on the Midnight Ocean.

Rubyspoon proposed and initiated the optimistically named "Never-ending Pillage", which ultimately ran for a decidedly sub-infinite three days, but she remains optimistic that it will begin again some day.

After winning the monkey, she ran an Ultimate artisan contest to test out the event format as a possible way to award a familiar to a deserving Cobalt-based player; some tweaking and a few months later, in June 2006 she ran the Ultimate duty puzzle contest, in order to do just that. Contexx was the winner.

Most recently, in August 2006, she gave away the octopus she won for distilling in the first ever lottery for a familiar. In a strange twist of fate, Popeye won the lottery and gave the octopus to Avrril, who would have received the same octopus from Oliveoyl had Rubyspoon not particpated in the original distilling bake-off.