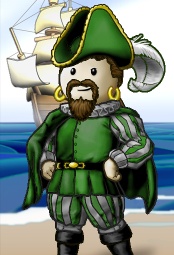 Lejerque is a pirate on the Midnight Ocean. He is senior officer in the crew The Nameless Corsairs.

Lovably snide and notoriously witty, Lejerque may be best known for his Blockade coverage, but it was his brilliantly-constructed games that catapulted him to the ranks of the intellectually elite. Spun off from his native Looterati forums, his literary puzzles were of legendary quality and frustrating diffuculty - including his familiar event, "Race for the Ruined Ring".

During his stint as a bear-fearing Shanty Jockey he often incorporated his literary flair with short contests for listeners. His afternoon show was one of the first to break the original all-shanty lineup, and his format was dubbed "music to puzzle to". His eclectic mix of pop, rock, electronic, and heavy videogame theme was so well-received that many shows began straying from the shanty format. But many listeners will tell you, he truly shined as a blockade-caster, making dull blockades humorous and monumental blockades truly legendary for his lucky listeners.