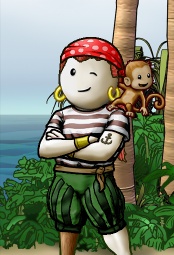 Pokey won a tan monkey (which he named Handsey) in the Year of the Monkey Chanties! of January 2004 on Midnight, which he later donated to Lejerque's contest, Race for the Ruined Ring. He also won a brown monkey (Chips) in the Carpentry Bake-Off! of April 2005 on Midnight. He later presented this monkey to Obaba for her work on Azumanga! MIDNIGHT.

Pokey is a member of the crew The Yo-Ho Yo-Yos, in the flag Looterati. His "uniform" is that of green pantaloons, a red bandana, and a tan and white striped shirt. Pokey sometimes accompanies this uniform with fancy boots, which shows off his pegleg. He received the pegleg sometimes in 2005.