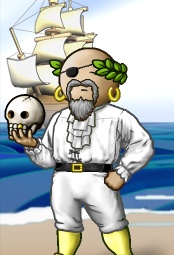 Merethif is currently a officer and cartographer of the crew Midnight Aurora and a captain in the Prolix Purlieu navy in the Jade Archipelago. He is a Guild Initiate in the Treasure Hunters Guild.

Merethif's rat is named Boo after giant space hamster which was a pet of Minsc from Baldur's Gate series[1]. It is believed (well, at least by Merethif) that Boo is a giant sea rat turned into common rodent by voodoo potion or atlantean magicks.

On June 13, 2007, his hearty Ivo abandoned adventurous and perilous pirate's life and left Viridian Ocean. As a heritage, Ivo has left a fine sloop called Well-Behaved Bullhead together with some pieces of furniture and other goods for Merethif.

On September 1, 2007, Merethif with his hearty Mariquana were together jobbing in their first sinking blockade. It took place at the Conglin Island in the Jade Archipelago. During the blockade the ship that Merethif was jobbing on had been heavily damaged and have sunk. Merethif managed to get to Conglin Island safely (as a trophy he still keeps a piece of the driftwood that helped him get there). When he'd finally get to the shore he was dripping wet and even found a fish in trouser-leg.

On October 3, 2007, Merethif sailed out onto perilous and unpredictable expanse of Ice Ocean for the first time. He decided to set up an outpost there, on Eieio Island in the Nenya Archipelago.

During the 2007 Halloween events Merethif with Mariquana were together members of Haunting Hunters team in Ye Dread Dead: A Reanimation Miscalculation competition. It was first time when Merethif faced those ghastly skeletons and foul zombies. He fought bravely against the horde of undead army with many glorious victories and some frustrating defeats. Eventually with the joint efforts of all six teams those unholy creatures have vanished from Viridian Ocean (well, at least most of them). Haunting Hunters got third place and Merethif become an owner of Undead Nunchaku trophy.

On July 13, 2008, during blockade of Tigerleaf Mountain Merethif got eye injury when the vessel he was aboard sunk. Since that day Merethif has been forced to wear an eyepatch.

The following portrait backgrounds have been created by Merethif:

The following trinkets have been created by Merethif:

The following easter eggs have been created by Merethif:

The following banners have been created by Merethif:

Merethif is a deed holder of following renamed vessels: