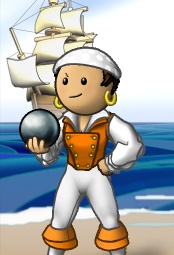 Polly, also known by the forum name Squashbuckle, is a pirate who plays mainly on the Emerald and Cerulean oceans, formerly of the Hunter and Midnight oceans. She's the main pirate for the event character Fava.

Polly started on the Midnight Ocean way back in October of 2004. While still just a greenie, she joined up with the Rudder Duckies, under Captain Lorry in the flag Epic. Polly quickly made a home on Nu and became a fixture on the docks of this out-of-the-way island. It was there that she met Peanutswench, who has remained her partner in crime ever since. Polly has spent her entire Midnight career in the Rudder Duckies, finally rising to the rank of Senior Officer.

Along with several of her Rudder Duckies mates, Polly decided to try out a doubloon ocean and moved to Hunter on the day it opened. With these Duckies and a handful of other close mates, she created and became the Captain of Flocktarts that same day. Flocktarts spent their early time on Hunter as a high level merchant and event-running crew. Eventually they decided to get into the flag game and created the flag This End Up. Polly is now a lady of This End Up. She enjoyed her time on this new ocean so much that she decided to make Hunter her official home ocean.

Polly took a 3 month break from her Hunter duties to portray the event character Fava on Cobalt. For 3 months she, with the help of Chilibean and her other beans, ran 12 events and governed Lima Island. The identities of Fava and the rest of the beans remained a secret until their rule of Lima Island ended.

Often Polly is found with fellow pirate Peanutswench. The two characters met on the docks of Nu Island in March '05. They have remained closely linked ever since, and now share ownership of their gaggle of familiars and assorted holdings on the oceans they play. Together they've run quite a few events both and plan to continue their partnership. They've refused to have a "pirate wedding," but their mates know that's just a formality.

Polly is one of the winners of the Fantasy Island Contest. Her wonderful design work can be seen at Duat Island, on the Meridian ocean (as well as on the retired/merged Malachite ocean).

Polly has used very few avatars on the forum. She has only changed a handful of times.